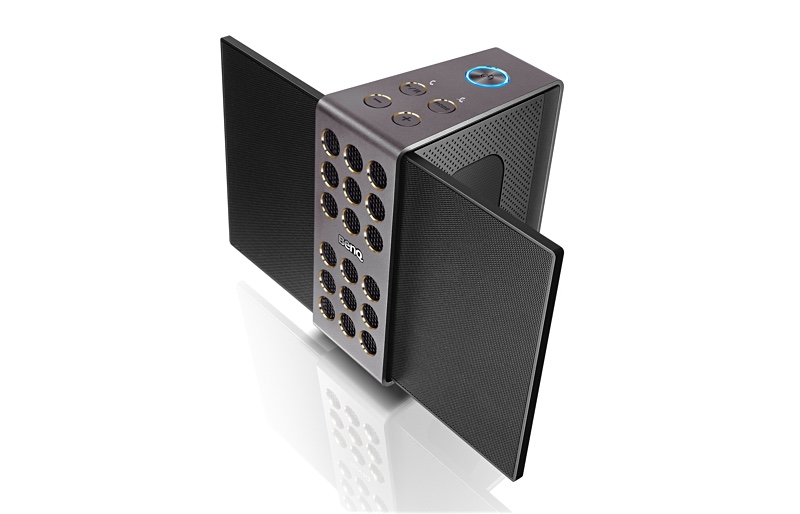 By DAN BILAWSKY
February 20, 2016
Sign in to view read count
It would be wrong to say that there's a burgeoning Bluetooth speaker market. That ship has sailed, and at this point, the technology is omnipresent. It seems like every company in the sound game has multiple models to offer, catering to nearly every listener demographic. But that doesn't mean there aren't developments to be found in this market and interesting tweaks on methods of sound production and design. Just look at, and listen to, the BenQ treVolo.

The Design And Features

The treVolo is an electrostatic speaker, utilizing the same technology that's found in some high-end, high-priced speaker systems. With this type of speaker and technology, a sizable amount of sound is produced from a flat surface. It's not a new concept in the world of speakers, but it hasn't quite made its mark in the world of Bluetooth speakers. BenQ is ahead of the curve in that department.

This speaker is built with a quad-amplified design, with two electrostatic panels that fold out for use (and in for storage). The low end is driven with a pair of two-and-a-half inch woofers partnered with passive radiators. Eighteen miniature circular grilles adorn the front of the speaker, covering the woofers.

It's a tad bulkier and heavier than some portable Bluetooth speakers, weighing in at 2.6 pounds and measuring 6.9 x 5.3 x 3.1 inches, but that's hardly an issue; just don't expect to throw it into a pocket, as you'll need a spare hand to carry it. It pairs easily with Bluetooth-supported devices—it only took a few seconds to connect an iPhone 5s and an iPhone 6s to the speaker—and it has a battery life that eclipses that of most offerings in this department. The written materials note that it offers "up to 12 hours of continuous play," and while that can vary depending on usage, it proved to be a fairly accurate time figure.

In terms of connections, the back of the speaker offers a line in, line out, and support for 16-bit digital audio through a Micro USB port. The speaker offers three different equalization options, controlled via the "mode" button on top. Listeners can shift from a "Pure" mode, with "minimal equalization," to "Warm," with "richer sound with more bass," to "Vivid," with "emphasis on lead vocals and instruments." The Bluetooth technology, which also allows the unit to serve as a speakerphone, supports streaming from up to thirty feet away.

Let it be known right off the bat that I am not an audiophile. I do, however, spend a disproportionate amount of time dealing with sound, working with individual student musicians, rehearsing concert and/or jazz bands on a daily basis, reviewing numerous albums and live performances annually, and performing when time permits. Opinions and perceptions concerning the sound of this product are informed by those experiences and pursuits.

This product was tested extensively over the course of (about) four weeks. Test recordings—albums that this reviewer has heard on various speaker systems and in various environments over the years—helped to provide a baseline to work from, different styles of music with vastly different instrumentation were used to push the boundaries and see how far the treVolo could go, and different scenarios came into play. There was, obviously, a good deal of jazz played through the unit—everything from the duo recordings of pianist Hank Jones and bassist Charlie Haden to vocal-centric albums from Cecile McLorin Salvant to swinging Basie big band numbers to classic sides from saxophone icon Coleman Hawkins. Nothing was off limits in the jazz department, but the testing wasn't limited to jazz. Classical music, the country-pop of the Zac Brown Band, jam band sounds from Phish, funky flavorings from The Meters, and fusion firebombs from various outfits were sent through the speaker. It also proved to be of great assistance during the process of transcribing a multi-hour interview, acted as a speakerphone on more than a few occasions, and had an opportunity to serve as a play-a-long device for a student working on a percussion ensemble piece on xylophone. In short, the treVolo was truly put through its paces.

So now for the big question: How did it hold up? The answer: Very well. In almost every scenario, the treVolo delivered. It scored high marks in the natural tonality department, producing crisp and clear sound that accurately reproduced the nature of instruments and/or voices; spatial presence was there, giving an up-close-and-personal feel to the sound; distortion wasn't an issue, regardless of the music at hand or higher volume demands; the speaker was easy to use, making it a good fit for those who aren't technologically inclined; and the visual aspects of the unit—not a requirement when it comes to speakers, but a happy bonus nonetheless—are a step above most Bluetooth speakers.

Drawbacks were almost nil here, but there was one worth noting. It had to do with bass sound/capability. When listening to anything with a bit more bottom to it, the sound occasionally became slightly muffled and out of line with where it should have been. Electrostatic speakers have been known to have some weakness in that department, but it only proved to be an issue—and a small one at that—with certain recordings (i.e. some fusion and hard rock material). The speaker did its job and then some with 95% of the material tested, and acoustic jazz tended to be one of the best sounding fits for this unit.

The MSRP for the BenQ treVolo is $299.00, but, as of this writing, the price seemed to vary a bit on the internet, as it usually does. Considering what you're getting, and the fact that electrostatic speakers of any kind are usually very pricey, that seems more than reasonable. This speaker has wings—literally and figuratively—that help it soar.