There is a video clip on Youtube that shows Goodman's orchestra live at the Hollywood Hotel the year before, in 1937, performing the climactic number "Sing Sing Sing": somewhere in the comments to the clip, a viewer expresses the wish that modern musicians would "take note of what these guys are doing." Absolutely, and a glimpse of what they were doing was provided again seventy years later at Carnegie Hall.


The music was provided by a both small jazz group and a "classical" orchestra (the "Champagne Symphony" Pops Orchestra: Champagne Symphony) put together by clarinetist and band leader Bob deAngelis and conductor/arranger John McLeod, both of Toronto. The Goodman band did not have strings, let alone a full orchestra, but that is the sound that was presented.

The concert began, as did the original, with the swing theme tune "Don't Be That Way," a powerful riff number that Goodman had described as his "ice-breaker" for the original night. DeAngelis is a fluid clarinetist with a full tone, and the superb acoustics of Carnegie Hall projected the sound very well. Carnegie Hall is not as big as one would think, or, at least, the acoustics are so good that you feel you are almost on the stage listening.

As a jazz clarinetist, DeAngelis is probably closer to Artie Shaw than Benny Goodman, nailing the high notes in quite a Shaw-like manner, but he was more like Goodman on the first notes of the small group classic "Moonglow" that began the medley of Goodman hits before the interval. 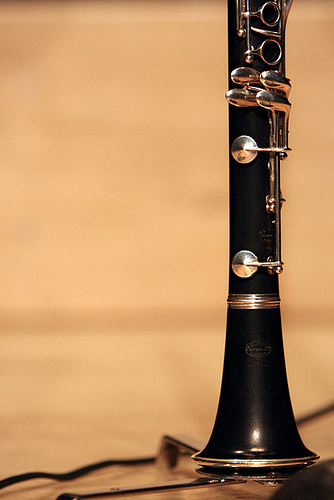 The numbers played in the concert were the major Goodman numbers of the period, with the exception of four numbers that were recorded by Goodman two or three years later in his career, and also one that was not identified with him at all but is nevertheless a great swing-era clarinet tune, Artie Shaw's enormous hit "Frenesi."

"Bugal Call Rag" began with the familiar bugal-like introduction of the Goodman band, but played neatly by what sounded like a classically-trained trumpeter in the backing orchestra: a little too neatly, perhaps. But the trombonist sounded authentic. DeAngelis also sounded good on this version. The big riff ride-out at the end sounded like a huge ship powering away out to sea. There was good arranging here.

The next number was the classic "It Had To Be You," which began in a rather schmaltzy fashion but then began to really kick: the Goodman band did not have strings, of course, but his rival Artie Shaw had experimented with them and so the idea nevertheless had some authenticity.

The concert was characterized by a small purely jazz group taking over from the full orchestra from time to time, just as Benny Goodman interpolated a few numbers with his small group in 1938. The basic small group was the same make-up as Goodman's quartet, but with bass added (clarinet, vibraharp, piano and drums), but on "Up A Lazy River" the group was joined by arranger John McLeod on cornet and a trombonist. The original Carnegie Hall concert had a salute to the history of jazz (up to 1938), and this Hoagy Carmichael tune was made a tribute to Bix Beiderbecke and his softer cornet sound of the late 1920s. The trombonist sounded quite like Jack Teagarden.

Canadian singer Melissa Stylianou took the microphone for a swish version of "East of The Sun," which had good strings that raised the sound above any danger of schmaltz: it was interesting to see two orchestral double bass players bowing the melody at one point. However the jazz bassist, on the other side of the stage, was a bit too modern in his style on this number.

It was the small group (the quartet plus bass) that ended the first half, with a medley beginning with "Moonglow." The opening notes of this song were probably the most authentically-Goodman like sounds of the night. "Avalon" followed, and then "Goodbye" and "Sing Sing Sing."

Of the other members of the small group, the bassist had an influential presence, his strong tone gliding under the others. The pianist was not much to the fore until "Airmail Special" (in the second half). It can be hard playing in a tribute concert: if you do an accurate job of reproduction, then you are seen as a "copy," but if you are yourself you may be said to be "nothing like" the original. DeAngelis was able to solve this by being himself, which was close enough to Goodman to work. The drummer was quite authentic, but I couldn't help thinking that the vibes player didn't seem overly keen. It would be very difficult to carry off an impression of the energetic and virtuosic original vibes player Lionel Hampton.

A major part of the original concert was trumpeter Harry James. Cornetist John McLeod was a good substitute—he is a great trumpeter, evincing power of the Harry James variety, and he also played some animated mute later in the night. His other main role, as arranger, would obviously be critical to the success or otherwise of the night, given that adding "stings" to normally non-orchestral music can cause significant grief for listeners! (An example was the use of string arrangements by Elton John on a tour in the 1980s). But not in this case: the arrangements were clever and subtle, sliding around and under the music in the foreground, at times actually being the music in the foreground, just as a true arrangement of a "bed" of strings should be.

The second half of the concert began with the Goodman opening radio theme "Let's Dance," which we were told was a 1930s re-arrangement of composer Weber's "Invitation To The Dance." Pioneer electric guitarist Charlie Christian was name-checked for the next number (that he wrote during his tenure in Goodman's sextet, from 1939-1941) "Airmail Special." A riffarama. The band called this performance "Email Special!" 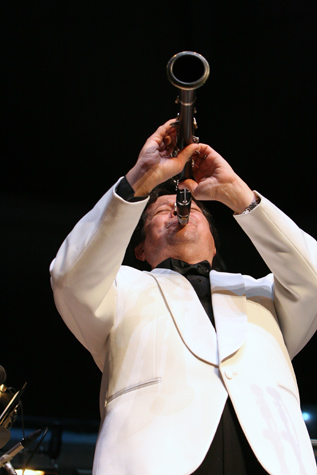 Peggy Lee in 1941), but whose date of cutting just may have served to allow arranger McLeod to "have some fun with it," as he put it after the concert.

One of the smoothest tunes around is "Frenesi"—Ray Charles played the tune as did Artie Shaw. John McLeod introduced it by saying that Benny Goodman did record it, and that he had recently discovered this (I found the record once myself on an EP). The arrangement was appropriately lush, and it is easy to see that the number must be a regular staple of the Champagne Orchestra's repertoire. Following Frenesi was a good recreation of the Goodman baroque specialty "Bach Goes To Town," a swing take on Bach. It was a great sight to see a front line of a clarinetist, a trumpeter and a bass clarinetist playing this tune. "And The Angels Sing," a great later release by Goodman was the penultimate number, featuring Melissa Stylianou and probably DeAngelis' best solo, and finally "After You've Gone."

The encore was a powerful version of the classic "Sing Sing Sing," begun in semi-darkness. The pianist came up with a part re-creation of the epic solo moment of pianist Jess Stacy, captured on mic in 1938 by, as legend has it, Benny Goodman moving the mic closer to the pianist. This was one of the moments of the night that reached back into the past to maybe just make you think you there on that day in 1938.