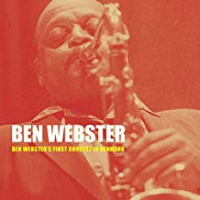 This is a small piece of jazz history. In January 1965, Ben Webster, newly arrived in Europe from America, was working out where to settle down. This concert shows why he decided on Copenhagen.

The album starts with Webster making a point about the playing of his former boss Duke Ellington's "In A Mellotone." Webster argues his case on piano, an instrument he played well, while brusquely growling instructions to producer Børge Roger Henrichsen. There is a great sense of being there.

The concert proper starts with "Pennies From Heaven." In those days, "European rhythm section" was often used as a term of abuse by U.S. jazz musicians, but there were exceptions and this was one of them: pianist Kenny Drew, Niels-Henning Orsted Pedersen on bass, and drummer Alex Riel.

Ellington's "Blues In B-Flat" and Rodgers and Hart's "My Romance" act as a prelude to the actual performance of "In A Mellotone."

This is Webster at his best, before he settled into his breathy, formulaic ballad rut. He is heading there on "My Romance," but there is still power and passion in his playing. The concert ends (for the news to be broadcast) after the first chorus of "Cottontail," Webster's "piece de résistance" with the Ellington band. In the liner notes Henrik Wolsgaard-Iversen, chairman of the Ben Webster Foundation, describes Ben's playing as having "a human, sincere feeling, a sparse timing—and always to the point; never too much, never too little."

Today there is an up-market waterfront street in Copenhagen named after Webster, who died in 1973. His grave in Assistens Cemetery is a place of pilgrimage. His portrait hangs in the city's concert hall.

Wolsgaard-Iversen recalls once telling Webster that his playing reminded him of Ernest Hemingway's early short stories. The saxophonist replied, "Well, you could say that. He could write too... and he was a fair boxer."

In A Mellotone (rehearsal); Pennies From Heaven; Blues In B-Flat; My Romance; In A Mellotone; Over The Rainbow; Cotton Tail.