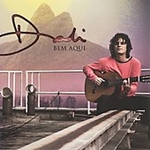 Eduardo Magalh&#227es de Carvalho, otherwise known as Dadi, has remained in the shadows of Música Popular Brasileira (MPB) also called the Tropicalia Movement for much longer than others of his ilk. While Caetano Veloso, Gilberto Gil, Chico Buarque do Hollanda, Gal Costa, Bethânia and several other artists led from the front of various ensembles, Dadi appeared to be content to play his myriad instruments—including a riveting bass and intricate dancing guitar—behind the likes of Veloso, Marisa Monte, Carlinhos Brown and others. His debut as a leader came only in 2005 when he released an eponymous record on a Japanese label.

In his relatively late debut, Dadi appeared to take his contented Carioca persona rather too far, but in the past five years his career has been gathering momentum. On Bem Aqui Dadi has created a rich stew redolent in the colors and textures of the Brazil that he loves and the variegated rhythm that is at the heart of the Tropicalia Movement—one that rocked North American for almost a quarter of a century. Here Dadi showcases not simply his instrumental skill but also his abilities as a composer, something the Movement put a heavy premium on as it was often seen as gently yet seriously thumbing its nose at the rock establishment in America.