Nuaia: Belong To The Moon 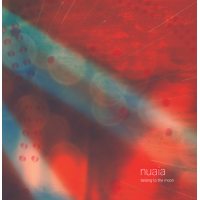 On "Don't Know Where To Turn" Norling's melancholic song drift over percussionist Michala Ostergaard-Nielsen's militaristic drums. Multiinstrumentalist Mika Forsling lays down a lilting, synth heavy, sonic tapestry that envelopes Norling's emotive articulation of the forlorn lyrics. Meanwhile, on "My Role" a more serene atmosphere prevails with Østergaard-Nielsen's sparse mallets falling like raindrops and setting the peaceful mood. Forsling's guitar lines shimmer through like rays of sunshine as Norling's eloquent and stirring vocals glide over them.

Strong hints of spirituality and mysticism permeate the album. "Seasonal" opens with Østergaard-Nielsen's tolling and chiming bells and the expectant rattle of her shakers. Norling's haunting chants pierce the surrounding electronic storm like a prayer of a futuristic pagan cult. The raw and elegant "Follow, Pt. II," on the other hand features Norling's fiery ballad that soars over psychedelic percussion and crackling background drone like a vengeful angel. The tune also showcases pianist Albin Johansson cascading notes and trumpeter Jonne Bentlöv's burnished tones.

Some of the pieces have an engaging narrative phraseology. The two-part "Leave It All Behind" has a sensual lulling mood that Østergaard-Nielsen's resonant vibes and Forsling's reverberating strings set. Norling's fragile, evocative singing ushers in a lullaby like mood that evolves into a hymn with rousing and thunderous beats.

The title track has a darkly cinematic nature. Norling's passionate enunciation of the surreal words floats over her band mates' captivating and mellifluous din. Østergaard-Nielsen's flat thuds contrast with her own rounded, echoing strikes creating intriguing tension. Forsling fills the space between voice and percussion with dynamic, vibrant ethereal harmonies.

Belong to the Moon is artistic without being highbrow, poppish while avoiding banality and adventurous without even a touch of abstruseness. It is an exquisite mélange of lyrical modernity and intellectually provocative poetry that is simultaneously substantial and stylish