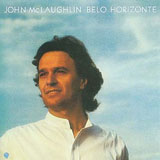 The '80s were not especially great years for guitarist John McLaughlin. Following his groundbreaking late '60s and '70s work with Miles Davis, various incarnations of the Mahavishnu Orchestra, and his genre-bending group Shakti, it's almost as if he disappeared from the public eye for a decade, before reappearing in strong form in '90 with Live at the Royal Festival Hall , the first of many recordings that returned him to a deserved position of prominence. But the truth is that while he recorded less frequently in the '80s, he managed to create one of his most enduring works. Thankfully Warner Brothers and Rhino have now seen fit to reissue this album, Belo Horizonte , in a beautifully remastered package that brings greater depth and warmth to the sound, reminding us that McLaughlin may have been forgotten, but he was most certainly not gone.

The early '80s also signalled a time when McLaughlin moved to France and, surrounded by a group of fine French players-the exception being American drummer Tommy Campbell-McLaughlin created a group that, while undoubtedly influenced by the music of Brazil, also reflected a Mediterranean disposition and a new-found lyricism. Armed only with a classical guitar, McLaughlin is still capable of lightening fast runs—witness his playing on the title track and the closing duo with Paco de Lucia, "Manitas D'Oro"—but he also feels more at east, more relaxed and capable of letting the music breathe. While there are synthesizers on the record, the overall approach is acoustic, with pianist Katia Lebeque and Rhodes player Francois Couturier creating a lush layer, while bassist Jean Paul Celea and Campbell create a polyrhythmic backdrop that ranges from the samba-like "La Baleine" to the restrained intensity of "One Melody." "Waltz for Katia" is an up-tempo waltz featuring violinist Augustin Dumay, who lends a taste of the French Riviera, while "Stardust on Your Sleeve" is the closest thing to swing that McLaughlin had recorded to date.

Through it all McLaughlin plays with inspiration, passion, and a strong sense of melody that seemed missing on much of his earlier work. As immediate as his work with the Mahavishnu Orchestra and Shakti was, Belo Horizonte demonstrates another side of McLaughlin that, at the time, came as a bit of a surprise. On the other hand, given the diversity of his work, McLaughlin's shifts in direction really shouldn't come as unexpected. Pat Metheny once said that "McLaughlin has changed the evolution of the guitar at least three times," and it is clear that refreshed, reinvigorated and relocated, he did it once again with Belo Horizonte , an album that sounds as fresh and important today as it did twenty-three years ago. One can only hope that Warner will see fit to give the same treatment the followup recording, Music Spoken Here.

This remastered version of Belo Horizonte is currently only available in the UK.