By DAN MCCLENAGHAN
October 3, 2002
Sign in to view read count 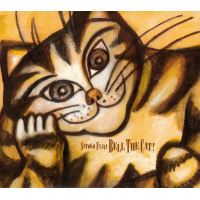 A tough review, this new CD, Bell the Cat! by Satoko Fujii. Her art is an indescribable entity. Avant-Garde, adventurous, daring, startling, "out there." All of those and more.

Pianist/composer Fujii began her musical journey in Japan, studying classical music. But she soon found that world too dulling and stuffy for her temperment. Improvisation and freedom, it seems, were in her blood, and her own music mixed itself into an amalgam of jazz, classical, traditional Japanese folk, with even some elements of hard-driving rock. (A caterpillar/butterfly metaphor seems apt—the winged one breaking away from the restrictions of the unyielding cocoon, and flying free; but then that might imply an inevitablity or a certain effortlessness.) The constants in her new music: improvisation, surprises and delights, staid musical assumptions smashed to little bits...

Fujii has worked in a variety of settings, most successfuly, perhaps, in the trio format. On Bell the Cat! she's hooked up once again with long term partners in sweet musical crime (five CDs, and counting) bassist Mark Dresser and drummer Jim Black.

Fujii's compositions are challenging, but they don't eschew melody or delicacy, nor do they shy away from dissonance and explosive clamor, or driving, wall-shaking beat. A thousand elements of sound interwoven here.

Of the seven songs on the CD, two are extended pieces. The opener, the fifteen minute-plus "Silence," draws the listener into its shifting realities. From gentle melodic containment to savage sonic disarrays; and "Slowly and Slowly" starts out as a stately straight-up tune that builds an ominous atmosphere; then some stretched-taffy bow work by Dresser's bass, and a rattle and snap, rocks on the tin roof drum/percussion interlude by Jim Black before Fujii comes back in with lush notes and chords.

Remarkable sounds, if you can come up with a remark for the indescribable.

Rewarding music for those with open minds, and a willingness to just...listen.

Silence, Get Along Well With..., Slowly and Slowly, Confluence, Foot Step, Bell the Cat!, Chaploo