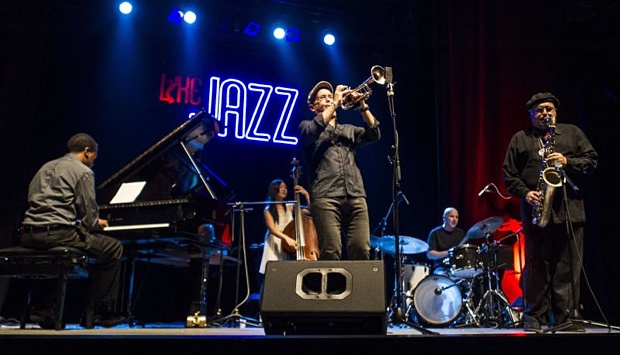 By THOMAS CONRAD
November 13, 2012
Sign in to view read count
Belgrade Jazz Festival
Belgrade, Serbia
October 25-28, 2012
There are hundreds of jazz festivals around the globe every year, in places like Baku, Azerbaijan, and Sibiu, Romania, and Valletta, Malta. But there may be no more improbable setting for a jazz festival than Belgrade, Serbia.

Not that long ago, in the late 1990s, during the horrific, genocidal wars in the former Yugoslavia, Belgrade was famous. So were other place names in Belgrade's general vicinity, like Sarajevo and Mostar and Srbrenica. What they were famous for was the slaughter of innocents, the worst atrocities in Europe since World War II. But now, 13 years after the 76-day NATO bombing of Serbia brought the Balkan wars to an end, you seldom hear anything about Belgrade anymore, at least in the United States. Americans have short memories, short attention spans, and something called a 24-hour news cycle. Only rarely does Serbia get mentioned on CNN these days, like when a notorious war villain is captured and taken to the International Criminal Court in the Hague (Radovan Karadžić in 2008, Ratko Mladić in 2011).

Since the downfall of the dictator Slobodan Milošević in 2000, Serbia has been moving slowly and painfully toward rejoining the community of nations. A society undermined by economic sanctions and years of repression, isolation and war does not heal itself quickly. Serbia has made progress toward democracy in its politics and normalcy in its everyday life, but a potential setback occurred in the presidential election in May of this year. The hardline nationalist Tomislav Nikolić narrowly defeated the more liberal incumbent Boris Tadić. Whether this development will hamper Serbia's prospects for eventual European Union membership is an open question.

There are some beautiful vistas in Belgrade. From Kalemegdan Fortress, you can look out over the confluence of the Sava and Danube rivers. But Belgrade is not a pretty city. It is gritty, austere and hazy. The dominant color is dirty white streaked with gray. The dominant architectural look is Soviet starkness, and virtually every outdoor vertical surface in the city is covered in graffiti. When you walk the streets, you occasionally come upon the startling sight of destroyed buildings, collapsed in on themselves, their guts exposed. They were hit by bombs in 1999 and have still not been rebuilt or even cleared. There is nothing romantic about Belgrade, but there is a certain edge to the place, an energy, that makes you feel fully alive. The people are watchful but very friendly once you break through. They have an attractive, unsentimental honesty that comes from hard experience. And if you are a meat-eater, the food is magnificent and cheap. 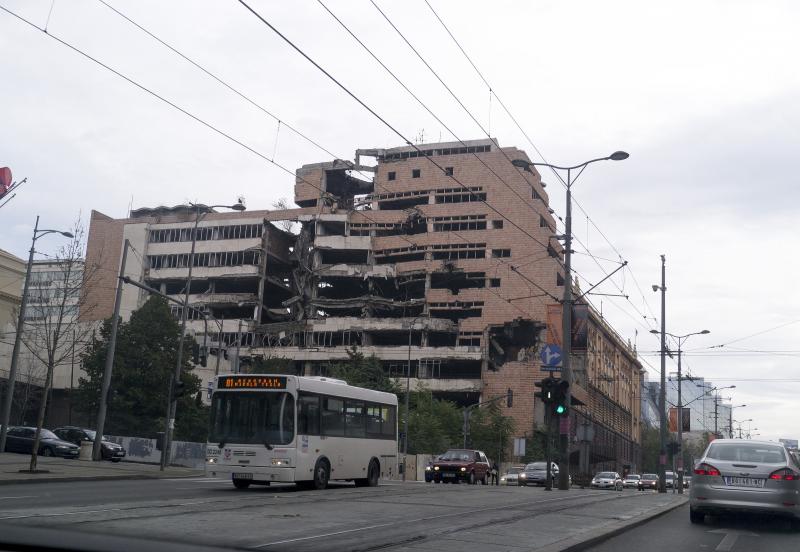 Somehow, in one of the poorest countries in Europe, with unemployment at 24%, the jazz community of Belgrade puts on a high-level festival every October. The Belgrade Jazz Festival can trace its history back to 1971, when the country was still Yugoslavia. In its early years, it was firmly established on the European jazz festival circuit, and everybody played there, including Miles Davis, Duke Ellington, Dizzy Gillespie, Sonny Rollins, Charles Mingus, the Modern Jazz Quartet and Ornette Coleman. But the festival went dark after 1990 when the wars started. In 2005 it started up again, organized by the Dom Omladine (Youth House) Cultural Center, under Director Milan Lučić and Program Manager Dragan Ambrozić. They were supported by the Assembly of the City of Belgrade. Like jazz festivals everywhere, it has been squeezed by the world economic recession. For the last two years, the festival could not even afford to put concerts in the full-sized venues that they had used between 2005 and 2010. Instead, almost all events now take place in Dom Omladine's own facility, just off Republic Square in the city's historic center. The building contains two performance spaces. Velika Sala is a recently remodeled auditorium that holds 560 (or 600+ when people stand in the aisles for the sold-out concerts). Sala Amerikana is a smaller space upstairs where the midnight concerts are held.

One thing that has not changed over the years is the insightfulness of the programming. The Umbria Jazz Festival in Italy had a budget this year approximately 40 times Belgrade's budget. Yet the two acts that were arguably the most important on the Umbria program in 2012 also appeared in Belgrade: trumpeter Ambrose Akinmusire's Quintet and Sound Prints, the new band co-led by saxophonist Joe Lovano and trumpeter Dave Douglas. And when you go to Belgrade, you always make some exciting discoveries among the young artists who play the midnight concerts.

Another thing that has not changed is the attendance. Most shows in Belgrade are sell-outs. Ticket prices are kept low. This year, prices ranged from 600 to 1000 Serbian dinars, roughly $7 to $12. The only exception was the opening night concert by Miles Smiles, where tickets cost about $14 to $18. While centralizing the festival in Dom Omladine created capacity challenges (Akinmusire and Sound Prints could have sold out a larger venue), it also created a more intimate festival hang. The foyer and the large landing outside were overrun with jazz lovers and hangers-on for four days. Dom Omladine was also the site of panel discussions, free foyer concerts and two photo exhibitions. One, titled Balkan Impressions, pictured major figures from the history of Balkan jazz. The other, 10 X 3, featured beautiful work by three noted jazz photographers: Tim Dickeson, Adriano Scognamillo and Yasuhiro Fujioka. 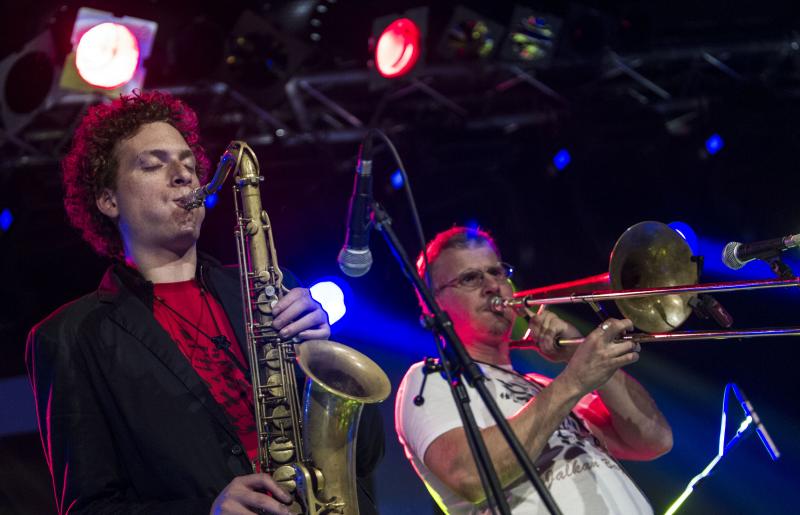 The informal launch of this year's festival took place one day before the official opening, with a jam session in Jazz Klub Čekaonica. The setting was quintessentially Belgrade-esque. You entered the gray, littered, creepy ground floor of an abandoned building near the Sava River, formerly a printing factory. The weak florescent lighting revealed cement walls covered in graffiti in Cyrillic. The elevator was broken. But Jazz Klub Čekaonica was worth the climb up nine flights of stairs, past empty dark floors. It is a cozy room with views of the river and the city. The jam session was led by an excellent international ensemble, Blazin' Quartet. Tenor saxophonist Joao Driessen, from the Netherlands, and trombonist Michael Rörby, from Sweden, played fresh, forceful neo- bop, driven hard by Bulgarian bassist Mihail Ivanov and Serbian drummer Srdan Ivanović. Vladimir Maričić, one of Serbia's best pianists, sat in. His public appearances have been infrequent in the past year because of the birth of his first child. Maričić is a powerful player. He instantly lit a fire under the evening. (Blazin' Quartet did a killing set in Sala Americana the following night.)

The next night, the opening concert by Miles Smiles, was out of keeping with the rest of the festival. First, it took place not in Dom Omladine but in Sava Centar, a cavernous 4000-seat arena across the Sava River from the old town, in Novi Beograd (New Belgrade). Second, the opening act was a competent but boring Balkan rock band, Darkwood Dub. Third, Miles Smiles, unlike every band that followed them over the festival's four days, phoned it in. The personnel was trumpeter Wallace Roney, tenor saxophonist Rick Margitza, guitarist Larry Coryell, organist Joey DeFrancesco, bassist Ralphe Armstrong, and drummer Omar Hakim. They can all claim legitimate, if sometimes brief, affiliations with various bands of Miles Davis. They are all skilled. But, oddly, they sounded less modern than the 40- year- old Miles Davis bands to which they paid tribute. They made no attempt to find fresh perspectives on pieces like Wayne Shorter's "Footprints" and Cyndi Lauper;'s "Time After Time." It was all head-solos-head, over the rigid, heavy-handed funk of Armstrong and Hakim. To be sure, with so much expertise on hand, some of those solos were entertaining, especially Margitza's and DeFrancesco's. And, to be fair, the crowd seemed to like it. 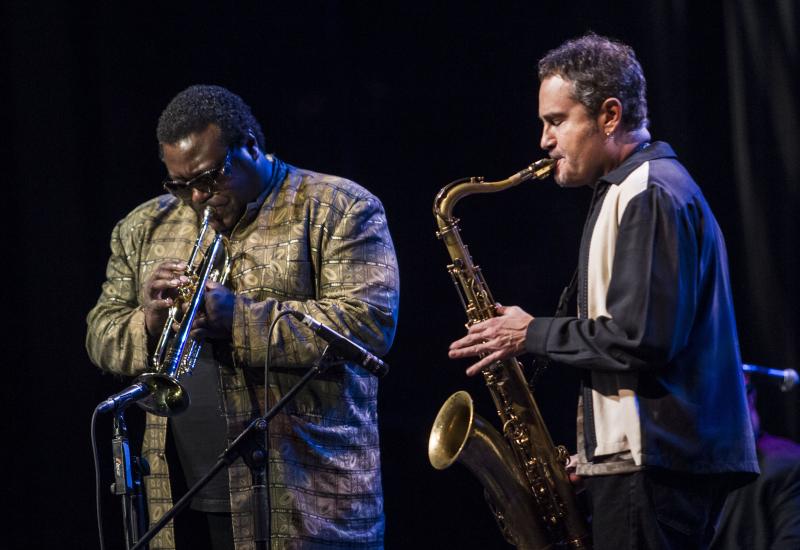 The night in Sava Centar was the festival's major concession to the demands of commerce and popular taste. As such, it was a success. The main floor of Sava Centar looked quite full. And it should be pointed out that, while many jazz festivals nowadays find it necessary to book pop acts, Belgrade's compromise was a real jazz band, even if it was one on auto-pilot.

Once the big public event in Sava Centar was out of the way, the real festival could begin in earnest. The second night started with Joe Lovano and Dave Douglas. Sound Prints is one of the most intelligent, articulate iterations of the new millennium jazz art form. They played original compositions by the co-leaders, all connected, in various subtle ways, to the distinctive aesthetic of Wayne Shorter. 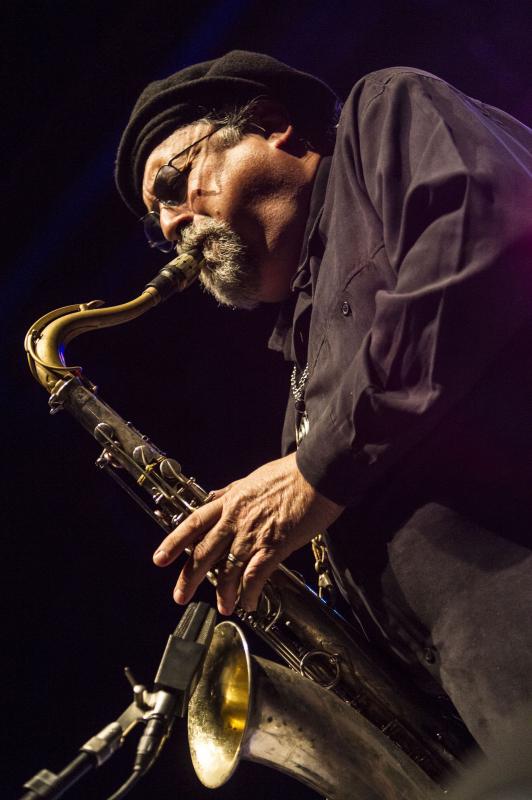 The strength of this band starts of course with the solo firepower of Lovano and Douglas, but what is even more rewarding is how freedom coexists with order, discipline and concision. Detailed forms, like Lovano's "Sound Prints" and Douglas' "Dream State," were carefully organized in individual and collective solo order, yet the music was exhilarating in its openness, every bar relative, all harmonies provisional, scales emerging and dissolving, rhythms (overseen by drummer Joey Baron) erupting and receding. Douglas and Lovano were each compelling by themselves, but even better when they soloed jointly, like on Douglas' "Up and Down." They shadowed one another in intricate overlays, sometimes matching in unisons, more often creating provocative tension between two contrasting maps of melody. And the precise arrangements did not keep Lovano from taking one of his signature, long, rolling, ruminative solos, on "Weatherman." Bassist Linda May Han Oh and pianist Lawrence Fields are two promising young players to watch.

There is a huge buzz around Ambrose Akinmusire right now, and in Belgrade, in a standing room-only Velika Sala, he showed why. He has a chance to become the next great jazz trumpet player because his lethal chops serve a deep, original concept. His jolting, blindingly bright lines, firing in multiple trajectories, might eventually come to sound familiar as listeners are exposed to his arsenal of devices. But right now they are trumpet forms that have not been heard before. And for all the excitement generated by each complex constellation of trumpet ideas, the real challenge of his art is perceiving how these segments relate to one another, in new progressions of musical logic. Akinmusire's narrative is never simplified with explicit transitions.

For all the freshness of his sonic world, Akinmusire's music is firmly grounded in history. Anyone who doubts his knowledge of his predecessors should check out his "Before & After" column in the October, 2012 issue of JazzTimes. He can apparently identify any significant jazz trumpet player from Henry "Red" Allen to Enrico Rava in four bars. He is a true nerd of jazz trumpet history. But he uses this foundation to create something of his own.