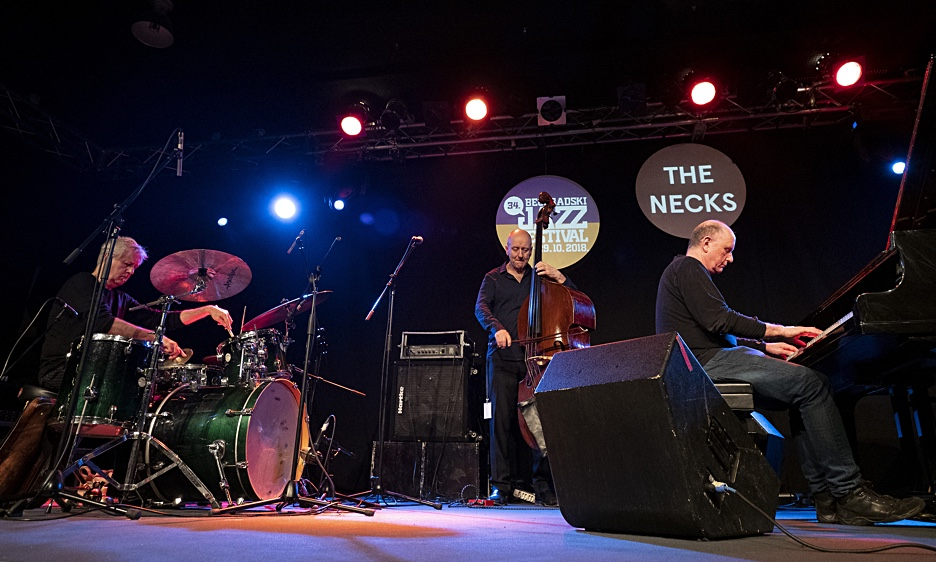 The 34th edition of the Belgrade Jazz Festival maintained its exciting strategy of diverse programming, from Kurt Elling to The Thing, Marc Ribot to Bobby Shew, Cortex down to The Necks. That's already an enticing blend of artists from Norway, Sweden, Australia and the USA. Most of the sets were split between the two stages of Dom Omladine (the Belgrade Youth Centre), but a couple of evenings were spent at the voluminous concert hall of the recently renamed Kombank Dvorana. Both of these venues lie very close to the city's main Republic Square.

The best Serbian band of the festival happen to be one of the country's best rock-jazz-improvisation combos, period. Fish in Oil were joined by a guesting Marc Ribot, to further enhance the proceedings, with the band's guitarist Bratislav Radovanović clearly awed by the presence of one of his axe-heroes, and Ribot himself visibly revelling in the music, which was certainly in sympathy with his own approach. Fish In Oil swirl surf, garage and psychedelia around with their jazz grooves, in a mangled spasm of creativity and genre equality, propelled by twinned percussionists, one of whom operates on a deliberately 'primitivist' level, with just snare, log and Gnaoua qraqeb (metal castanets). The Fish were entangled dangerously in their music's nets, as the set climaxed, with Radovanović stepping aside for Ribot to spark most of the rough-twang solos, but entering the fray himself towards set's end, sounding quite akin to the New Yorker in style. Whether this was a deliberate homage, or a history of shared guitaring influences, it was hard to decide, but the end result was a doubling in the excitement stakes.

Compared to the 2017 edition, the indigenous Serbian contingent wasn't anywhere near as impressive, either in numbers or adventurous excellence. A couple of the local acts on the dedicated Serbian late nighter (usually on the festival's closing day) were somewhat smooth and mainstream, when set beside 2017's impressive crop. Fish In Oil were definitely the leaders for 2018, but just before they played, there was a freebie 'commuter' gig in the Dom Omladine foyer, with the Mona Nheili Trio, and their guesting saxophonist Rastko Obradović, who streamed out multiple eloquent solos. This was easily the most exciting of these scene-setting bar-foyer gigs.

Later on the opening night, upstairs on the smaller, informal Amerikana stage, the LAN Trio brought players together from England, Portugal and Norway: saxophonist Julian Argüelles, pianist Mário Laginha and drummer Helge Andreas Norbakken. The latter employed a pair of djembes, a pair of wheel hubs, a clump of bells and a large floor tom. Argüelles opened on soprano, and the others joined one by one, making a global-folksy canter, marked by a strong jazz vocabulary. Norbakken skimmed his brushes across the djembe skins, preferring these lighter implements for much of the set, then Argüelles got into some fierce tenor honking, clearing a space at the core of the music, for an epic solo during "O Coro Das Meninas," by Laginha, the trio's chief tunesmith. The Necks are a different sort of trio, long cricked by improvising, but with a certain set of ground rules. These Australians, Chris Abrahams (piano), Lloyd Swanton (bass) and Tony Buck (percussion), have been creating spontaneous pieces for just over three decades, their core pre-meditations appearing to involve a.) an improvisation having a likely length of around an hour, and b.) a strong chance that it will involve an incremental, linear development, often travelling from near silence to heavily amassed content. It must be the glare of the Outback!

There was a graduation from spaced flutters to a denser rippling pulse-throb, Buck having laid out mini-gongs on his skins, as Swanson smiled with regularity during his mirage thrum, not an expression that usually appears during a Necks séance. Overtones seemed to rear up behind our ears, as matter massed, Buck scraping gong-edges across skins, in memory of nails-down-blackboard. The piano patterns shifted to something more insistently doomy, and a lone 'jazz whoop' was given from somewhere in the audience, again, not something usually heard within Neck-space.

Most times we'd witness this band, it will be around eight o'clock, rather than during the Witching Hour. There was a peculiar after-hours delineation to this build-up. Abrahams introduced another fresh piano inflection, which in turn prompted a switch in drum pattern, a faster hyperventilation encroaching, a darker side of the Neck revealed, as they transcended the known qualities of their instruments (this is something that does regularly happen at Necks gigs) and their individualities. There was an instant where everything hit, and an eerie South African flavour evolved, as they wound down into industrial chiming, Swanson grim, with dragged bow.

Completely contrasting, the long-established RTS Big Band invited along guest trumpeter Bobby Shew, the veteran swinger from Albuquerque, for a live television broadcast set on the Saturday night. A hot repertoire was in store, as the Ray Bryant "Cubano Chant " struck up, heavy on the congas and cowbell. Astor Piazzolla's "Oblivion" followed, continuing the Latin trend, then Duke's "Cottontail" returned us to the jazz mainstream. Shew remained seated throughout, due to a recent slip, but this had no negative effect on his trumpet and flugelhorn solos, which were scattered liberally through this sequence of well-chosen (and well-arranged) tunes. A tender flugel rendering of "Smoke Gets In Your Eyes" closed the concert, as a kind of encore, although Shew hadn't left the stage, due to his seating arrangement.

Later, upstairs, another one of the festival's electric revelations arrived from Austria, with Kompost 3 offering an aggressive transformation, when compared to their recorded existence. Celebrating a decade together, they are four rather than three, containing (barely) Martin Eberle (trumpet), Benny Omerzell (keyboards), Manu Mayr (bass) and Lukas König (drums). Keys were filtered, broken, scuzzed, and percussed, with Omerzell hunched over their tiny bodies. Eberle's slide trumpet and König's tumbling, muted skins, created abstraction prior to groove, with a Peter Evans frosting across the surface of submersible keys, clavinet palm-slap style, as an obsessive drum hyperactivity took over. Eberle emitted multiple tone-breaths, whilst e-bow hummed over bass strings. The horn's mouthpiece was removed, for an extra peppery sound, and König's accents were constantly in flux, as Eberle stepped on a loop pedal, for sustain and layering ecstasy. Such late-night extremity emerged with frighteningly high incidence, courtesy of The Necks, Kompost 3, and the following upstairs session with the remarkable cumulative thrust of Cortex and The Thing, mostly from Norway, but with a huge smear of Sweden. It was almost too much, witnessing these two outfits in close succession.

The four-piece Cortex involved themselves in their accustomed bustling themes, tight and careening, solos on the run, frequently swapping leading fingers of hands whilst in freefall, loaded with extreme prowess, sonics ripped to the virtuoso grit-limit. The Thing gave one of their most energised performances, considering that even their least enraged appearances can decimate the efforts of most mortal ensembles. Mats Gustafsson used his alto as a gateway drug to tenor, on his intense journey to rip out the heart of Viking Jazz. Paal Nilssen-Love had his drumkit arrayed really low to the stage-ground, making up the most speed-blurred interaction possible with Ingebrigt Håker-Flaten manhandling with bloody digits. A colossal haemorrhage communion with Paal 'The Terminator' N-L!

Gustafsson was streaming explanatory verbiage between numbers, announcing a Frank Lowe tune, painting pictures of lesbian viking warriors lost in the northern icy wastes, biding time before Håker-Flaten managed to trigger his electric bass wah-wah, and then they became an even more monstrous Thing!

A fine example of this festival's wise way with contrasting our jazz visions was the next night's set in the large Kombank Dvorana, the suave Chicagoan singer Kurt Elling negotiating his urbane avenue of verbal sophistication, an eccentric who subverts from within the Broadway clubs, as opposed to levelling them with a wrecking ball. This set was one of the best of his experienced by your scribe, following a gap of three or four years. Elling always drops in some new touches each time he's sighted.

He began a capella, and we couldn't quite place the folky hollering, until after a few more lines, when the band stepped in and it was revealed as Bob Dylan's "A Hard Rain's a-Gonna Fall," in a highly unusual incarnation. Its author became scat matter, as Elling deconstructed the song into jazz tendrils, operating his extreme microphone technique, a graduation beyond mere subtle close-then-far placement, turning his holding positions into a theatrical device. Then, after that great display, there was a surprise drum solo from Adonis Rose, defiantly out of place in the accepted sequence-of-things. And this was just the beginning of a set that found this maestro Elling in command of his subtly skewed entertainment, in its own mild-mannered, charming way, as much of an alteration from the 'norm' as those confronted by The Thing and The Necks.