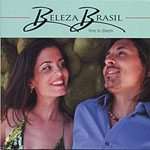 Genuine joy and exuberance are rare in recorded music. Combine these emotional qualities with savvy vocals and sophisticated musicianship and you've got the beginning of a description of Beleza Brasil. Time To Dream was recorded in Brazil but the band's musical choices reveal a range of styles and influences including jazz, pop, and rhythm and blues. The majority of tracks are Brazilian classics that are delivered with the casual confidence of long familiarity with the material.

The session opens with a lively display of three highlights of the recording: Madeline Sales's flexible, versatile singing; Humberto Sales's shrewd acoustic guitar playing; and the complex layers of rhythm intertwining below the melody line. Madeline shifts from tempo-to-tempo with uncanny ease and agility, emotionally attuned to the material whether it's from the pen of Antonio Carlos Jobim, Irving Berlin, or bluesman Eric Bibb. Humberto deserves commendation for his sophisticated arrangements of a mix of Brazilian and North American traditions; he is also the leader and the hub of this band, weaving the vocals and multi-layered rhythms together with precise and swinging guitar work. Throughout the session the rhythm section, often including an electric piano, is superb.

Highpoints of the session include Jobim's opening "Agua de Beber (Water to Drink)," featuring both the vocals and acoustic guitar. The vocals slide effortlessly between Brazilian and English, with some deft scat singing tossed into the mix. With their Brazilian credentials firmly established the band transitions into Berlin's classic "Cheek to Cheek"; here, Madeline's ease in shifting rhythmically into a swing jazz mode is notable.

Humberto's guitar sets the bluesy tone and temper of Bibb's "Don't Ever Let Nobody Drag Your Spirit Down." The track develops within an extended vocal/guitar duet, over effective and understated percussion and drum work. Again, the vocals are entirely convincing, demonstrating Madeline's exceptional range and talent.

Incidentally, Beleza Brasil could be translated as Beautiful Brasil, and the core of the band (Madeline and Humberto Sales) have relocated to Charlottesville, Virginia. Their Virginia-based group is on its way to becoming as good on stage as their Brazilian band is on disc. Reportedly, Time To Dream will be followed by a Virginia-based recording in the near future.