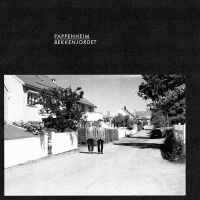 Pianist Oscar Grönberg and drummer Tor Haugerud are Scandinavian improvisers who have in recent years both been active in the remarkably fertile jazz scene in Trondheim, Norway. There they have collaborated with folks like Paal Nilssen- Love, Kim Myhr, and Eldbjorg Raknes, as well as being active in groups like Friends and Neighbors (Grönberg) and the Trondheim Jazz Orchestra (both Grönberg and Haugerud). Although they have substantial experience in a variety of genres and idioms, on this recording it's pure free improvisation that is on offer—and it's quite effective, especially for those listeners who don't depend on a lot of ostentatious bombast to sustain their interest.

The title of the record refers to an anarchist gardening collective in Trondheim, which actually reveals a lot about the music here. Grönberg and Haugerud contribute equally to the music—there's no "leader" here, as both are intricately involved in crafting these improvisations. Moreover, rather than a lot of dramatic variation or emotional volubility, the overall approach of the music involves the patient development of smaller figures: much like the gradual growth one expects from the careful cultivation of plants in a tranquil, pastoral setting. Rather than relying on grand, explosive outbursts, then, Grönberg prefers miniature fragments, especially in the upper register, that branch off in interesting ways, while Haugerud uses his kit not to create rolling waves of sound, but rather in meticulous, well-defined gestures, such as teasing out the dynamics of a particular cymbal or just one or two toms.

The music does occasionally build in intensity, but in an organic manner, subject to an internal logic that develops in each piece, and without the kinds of startling flourishes that are as likely to distract or to provoke than to engage. Even in the music's more lively moments, as on "Kråketreff," where Grönberg launches into a sprightly dance-like cadence, or "Barnål," where he exchanges percussive salvos with Haugerud, the effect is never overwhelming. The duo seems most in its element when tracing out delicate figures, as on the minimalist "Nidelven strømme": patient, subtle repetition and minute progression rather than sudden impulsivity or frenzied tumult. The result certainly bears rewards for listeners of like-minded patience and dedicated focus.