Being Prez: The Life & Music of Lester Young 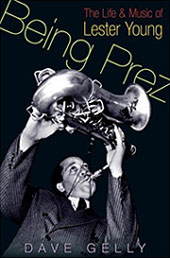 A New History of Jazz, arguably the seminal jazz history text, was written in 2001 by Alyn Shipton, a Brit. Richard Cook's Jazz Encyclopedia, from 2006, previously reviewed by this writer here, and in my view the most interesting and current of available jazz encyclopedias, was written by Richard Cook, a Brit. Chasin' the Bird: The Life and Legacy of Charlie Parker, likewise reviewed by me here recently, was written and published in 2007 by Brian Priestley, a Brit.

Being Prez: The Life & Music of Lester Young, the current subject under review, concerning the iconic saxophone stylist, is written by Dave Gelly, a British author and tenor player. One could also mention other British jazz writers, such as jazz musician, broadcaster and author Humphrey Lyttelton, jazz singer, critic, writer and lecturer George Melly, Scottish jazz musician, composer, writer and educator Ian Carr, and jazz and obit writer for The Independent Steve Voce.

What is it about the Brits that appears to make them such keen, interested, and thoughtful chroniclers of the American jazz scene? Does some geographic distance from the scene enhance breadth of view, focus and perspective?

While you are pondering these rather dry and pedantic questions, let me hasten to reassure you there is nothing dry and pedantic about this latest of Dave Gelly's books. Gelly is above all a jazz enthusiast, and this most readable biography is written through that prism. Although he analyzes Lester Young's recordings in some detail, his prose is bright and clear and never bogs down in detail. Putting music into words is never an easy task, but Gelly makes it a logical and understandable one.

A number of authoritative biographies of Lester Young already exist. Louis Porter's exhaustive Lester Young (MacMillan, 1985) and Professor Douglas Henry Daniels' Lester Leaps In: The Life and Times of Lester "Pres" Young (Beacon Press, 2002) are but two. What niche does Gelly believe he fills with this tome? As he explains in the Preface, "The world into which the artist is born, the culture in which he grows and the events of his life determine the form which the art takes, and is of specific interest for that reason." In Gelly's view, prior biographies have not adequately explored the ways in which Young's life and art enlighten one another; Gelly has specifically attempted to do this.

Gelly is especially fond of Young's recordings with Billie Holiday, and he takes care to show how their special relationship influenced their performances together. I very much appreciated his analysis of Young's recordings in different settings; it was useful for me to pull those recordings off the shelf and listen to them as I read Gelly's analyses.

Lester Young was one of the most individual and eccentric artists jazz has produced, and, despite the fact that he lived his life on a public stage, he was nonetheless pretty much of a recluse. Gelly not only manages to paint this picture, he also provides sufficient background information so that we can understand why he behaved in that manner; despite his off- putting language, hip attire and mannerisms, performance posture, and conflict avoidance that bordered on extreme, Young comes across as a comprehensible, sympathetic and ultimately honest individual for whom music was his raison d'etre.