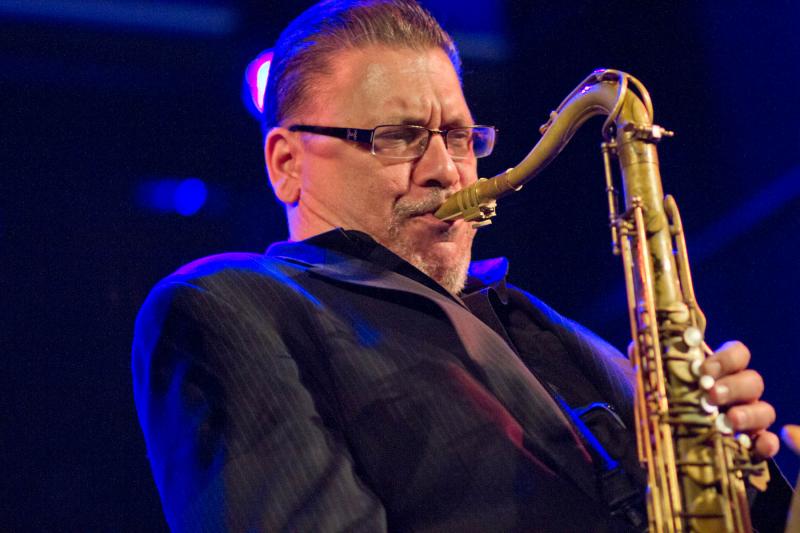 By BECKY YEE
July 3, 2012
Sign in to view read count
Meet Becky Yee:
Photographer/videographer Becky Yee peels back the cultural skins to expose what's deepest in us. This piercing-yet-inviting point of view can be seen in her editorial, commercial and curated portfolios. Becky's ability to provoke confession and embrace compulsion has drawn in clients from Beijing to Berlin. Focusing on the extreme contrast of Ura (backside) and Omote (front side), the difference in space between private emotions and public perceptions are explored in her work.

I knew I wanted to be a photographer when...
I stole my older sister's Mickey Mouse Camera and went everywhere with it. The camera was a kid's toy camera but it really worked. The camera was in the shape of Mickey Mouse's head, it used 110 film and you pull his ear down to release the shutter and take a photo. I have a photo of me holding it when I was about five years old.

Then, for a High School graduation gift my father bought me a SLR camera and I learned how to photograph using just manual settings. I took a black and white photo class in college and learned to develop negatives and print photos. I didn't major in photography but studied communications and began my post college career working at J. Walter Thompson and was on the team that helped to launch Prozac. However, my love and passion for photography eventually took over and I wound up pursuing a career in photography.

Your approach to photography:
I believe everyone has their own beauty and charm and my approach to photography is to capture and showcase everyone's special "something." I consider myself an exploring visionary and I'm tremendously curious about my subjects. People fascinate me and I enjoy hearing their stories and what they did in their life and why they are here and now in front of my camera. Not only do I like to hear stories—I am a storyteller too—but unlike a movie which has 90 to 120 minutes to tell a story, with photography you have one second. I strive to capture a perfect moment of stillness that embodies an entire story in 1 frame. I was always amazed at how still photography takes an intangible, ephemeral fleeting moment and stops it right then and there. The historical power of photography is really mind blowing to me.

I also think about the subject's brand and what they are known for and think about what I can bring to the table to enhance the talent that is already there. Hopefully my images can show the world a different dimension about this subject that wasn't so apparent before and penetrate those facades we create to show a true beautiful inner character. Inner beauty is coupled with my fashion photography background which is very polished and well produced and I feel that I am capable of taking iconic images. 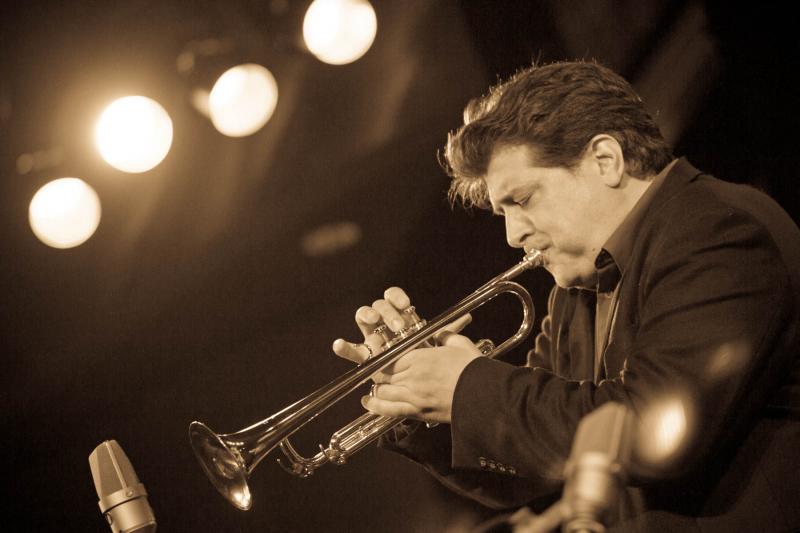 Your teaching approach/philosophy:
I always encourage my assistants to not copy my style or philosophy but to create their own. To follow their own unique vision and direction that best suits their character. Many of the people who have assisted me have become professional photographers and I love that. Sometimes I talk to students going to school and I am really not 100% sold on photography schools. Of course, you need the basic skills of how to operate a camera, aperture, shutter speed, ISO, color balance but I think I can teach someone those basics in a weekend.

Photography is really something you need to learn by doing and not in a classroom. I recently had one intern who graduated from a four-year school in film and photography and didn't even know what a gobo was. I was shocked. I said to myself, "What are they teaching in school?" These kids study photography and come out in debt $100,000 and they are totally unprepared to work in the commercial professional photography field.

Your biggest challenge when shooting indoor (or low lighted) events:
With music events low light is always a challenge. Especially in jazz clubs which can be really dark and everyone is sitting and maybe they are enjoying dinner it is difficult to move around so much to get different angles. Once when I was shooting Terri Lyne Carrington with Esperanza Spalding and Geri Allen, at the Village Vanguard. Geri was on piano and had her back to the audience the whole time, so in order to get a good shot, I had to worm my way between a column and a table and squat down so the people behind me could still see.

During live performances they usually do not allow flash photography. Focusing is always a problem and artefacts, and noise is an issue. You need a fast lens, but even with a fast fixed lens it can still be a challenge to get the shots you need. I sometimes make an image black and white so the blurriness as well as the noise and artefacts add character to the photo. 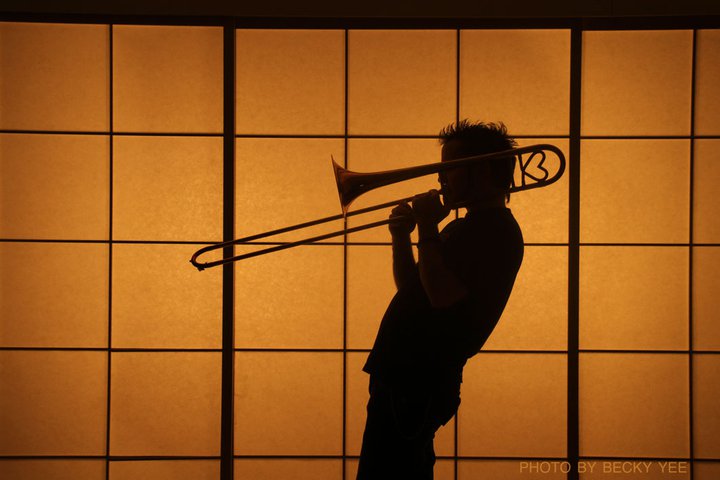 Your biggest challenge when shooting outdoor events:
The biggest challenge I have ever had shooting outdoor was shooting in the middle of a Typhoon. It was on Ooshima, a beautiful island and I was shooting a three-day outdoor rave for Edwin Jeans, who sponsored one of the side stages. At first the sun was shining, it was warm, and we could swim in the ocean. Everyone was dancing under clear blue skies and, then that night, around midnight a typhoon struck and it was miserable.

I was supposed to be shooting till 2-3AM, but the stage I was shooting on was taking so much water that they had to cancel the show because of all the issues with electricity. There were over 10,000 people there and most were camping but because of the typhoon they wound up being evacuated to a Junior High School Gym.

The next day we couldn't work during the typhoon. The rain was coming down so hard and the winds were so strong that we would walk with our backs to the wind because it was so painful to have the rain hit your face. The last day of the rave the weather cleared but the main stage was completely destroyed so the main acts shared the stage I was working at and I had to shoot till 5am. I watched the sun rise on the top of a hill overlooking the ocean and the skies after a typhoon are very different, it was deep reds and vibrant pinks. It was tough but the experience was really worth it.

Favorite venue to shoot:
I don't really have a favorite venue to shoot. I like shooting anywhere I can listen to great music and capture some great moments in time. I have shot everywhere from a big stadium with Metallica to a small basement jazz club in the outskirts of Tokyo and they are all wonderful places to shoot.

Favorite festival to shoot:
I love all the music festivals, the gathering of so many musicians and fans and the outdoors. But I guess New Orleans Jazz Festival and Spoleto. I love Charleston the food is so amazing there. So good music, good food—who can beat that? I also like Fuji Rock Festival and Summer Sonic in Japan.

Where was your first assignment location?
My first location assignment was for Sonar, a three-day music festival in Barcelona, Spain. I love Barcelona and I love music so the combination of the two was heaven. Not only did we have to shoot the music festival, we also had to shoot an 8-10 page fashion editorial with clothes from selected Spanish designers in the festival. It was a lot of work, we had to scout cool people and convince them to model for us, then get them to change right there in the middle of the festival. We borrowed a sheet from the hotel and just held it around them as we didn't want someone walking away with an expensive designer outfit.

It was a real challenge, we had the summer Balearic sun beating down on us and we were surrounded by tons of people. We wrapped up at Sonar by Day and then we had to shoot Sonar by Night. So I took off my fashion photographer hat and put on my music event photographer hat and shot Björk, Underworld, Jeff Mills and other world famous DJs, and in between tried to capture the energy of over 20-30,000 people dancing till 5AM. Very long day and no sleep but it was great experience I learned so much and some images were also published in Oyster magazine in Australia. 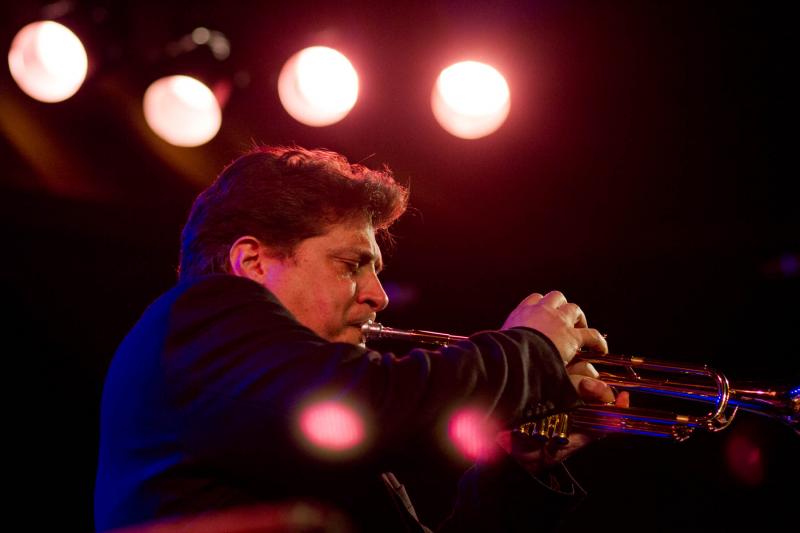 Your favorite musician(s) to photograph:
Favorite musician would be my boyfriend, Joe Beaty. He is a trombone player and Mike Corrigan of BAC Musical Instruments made this custom trombone with a heart on it. It's very distinguished and very cute. You can do a lot with that dynamic shape and also when he plays he turns crazy colors he gets so red and looks even purple sometimes and veins pop out on his forehead, I think he is going to explode.

I also loved shooting Esperanza Spalding. I was shooting video at that time so the lens focused on her the entire time and she was so charming I felt like I wanted to climb through the camera lens and get closer to her. She has that special sparkle that you feel really drawn to her and you can't take your eyes off of her.

Did you know...
I am a fourth degree black belt in Kendo, Japanese fencing and have practiced for over 20 years and won tournaments in Tokyo and have been East Coast Woman's Kendo Champion. I also teach kids kendo class in Union City NJ.


When I first moved back to New York City from living eight years in Tokyo, my first job was shooting a men's fashion catalog for a custom suit company that has the prime minister of Japan as a client. They were inspired by the one-button suits many jazz musicians wore in the '60s. Instead of models, the client wanted to use real jazz musicians. I had to take photos of the musicians with their instrument and send them to the client in Japan for selection. We were all treated to a few days of mini-concerts from everyone who came to the casting. There was one guy who set up vibraphones, it was really great. We wound up using Clarence Penn and Ron Affif, and shot at the Zinc Bar and on location in Tribeca. Hopefully they were both happy with their custom-made suits too. One of the perks of the gig! I also believe they flew Ron Affif to Tokyo for a special show.

View more Becky Yee photos at All About Jazz