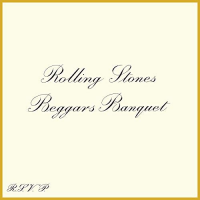 It is hard to properly define when rock music reached its zenith, so I am going to designate that pinnacle as the four-year period between 1968 and 1972. As a not-so-certain coincidence, this same period corresponds to what is considered the Golden Age of the Rolling Stones, which further not-so-certainly coincides with the departure and subsequent death of founding member Brian Jones and the hiring of Mick Taylor away from John Mayall's Bluesbreakers. But that is getting a little ahead of ourselves.

Early in 1968 the original band members were working up new songs for their recording that would follow the rather poorly-received Their Satanic Majesties Request (Decca, 1967). Request was released as the cheeky answer to the Beatles' Sgt. Pepper's Lonely-Hearts Club Band (Parlophone, 1967), released a few months previous. These recording dates found the Rolling Stones trying on a psychedelic sound in the studio, including elements such as unconventional instruments, sound effects, string arrangements, and African rhythms. From a creative point of view, the band was dissatisfied with the results, prompting the band back to the more stripped-down sound of their previous recordings, while changing their creative direction and diverging from the musical arc taken by the Beatles.

It is useful to note that the Beatles were redefining rock music from a blues-roots based music into a more popular realm, the logical evolution from the era of Sinatra and Darin. In his far-reaching book How the Beatles Destroyed Rock 'n' Roll: An Alternative History of American Popular Music (Oxford University Press, 2009), critic Elijah Wald compares the Beatles cultural arc to that of bandleader Paul Whiteman in that both homogenized black, roots-based music, into a wholly commercial commodity, arguably at the expense of the original. Whiteman made jazz "respectable" and the Beatles made rock music marketable. The Rolling Stones followed the Beatles arc (albeit with a revolutionary flair) until the failed with Their Satanic Majesties Request. This became the existential drive for the band's return to ground and the music they cut their teeth on. They becape the keeps of the flame for blues and country-based rock and roll.

The subsequent album reached deep into the American vernacular of country and blues that would begin the band's Golden Age. The release of the album Beggar's Banquet enjoyed its Golden Anniversary, December 6th. It was the last release to be produced by the original band with Brian Jones in tow. The recording's producer, Jimmy Miller, described guitarist Keith Richards as the real power behind the recording, Richards stepping-up made a necessity by the increasing unreliability of Jones. Jones played on six of the ten tunes making up the album: sitar and tanpura on "Street Fighting Man," slide guitar on "No Expectations" and "Jigsaw Puzzle," acoustic guitar and harmonica on "Parachute Woman," harmonica on "Dear Doctor" and "Prodigal Son," and Mellotron on "Jigsaw Puzzle" and "Stray Cat Blues."

Jones' exit from the band had its roots earlier, before recording Request. Jones was arrested on May 21st, for possession of marijuana. It was his second drug arrest. Jones faced a long jail sentence if convicted. Ultimately found guilty, the judge gracefully fined Jones, telling him to go forth and sin no more. This was the beginning of the slow cascade of a train falling down the stairs of a burning building. The band wanted to eventually tour but Jones was found not fit because of this recent arrest and his poor attendance at rehearsals and recording sessions, and his poor performance when he did show-up. Jones' behavior continued to deteriorate during the Request and Beggar's Banquet recording sessions, leading to his early exit from the picture, a deficit made up for by Keith Richards, marking Richard's rise as a direction-providing force in the band. It is here that the seeds were sown for Exile on Main St..

The Banquet recording sessions provided the single "Jumpin' Jack Flash" (never formally released as part of a records album), on the previous May 24th. This was a spare, acoustic rock juggernaut that was something new to the evolving rock sound. The song is not based on the familiar 12-bar harmonic format of early rock and roll. Instead, the harmonic base was rearranged in ways that affect all the music released thereafter. The recording of the song was also novel. In a 2007 interview with writer Ian McPherson, Richards described his method as such:

"I used a Gibson Hummingbird acoustic tuned to open D, six string. Open D or open E, which is the same thing—same intervals—but it would be slackened down some for D. Then there was a capo on it, to get that really tight sound. And there was another guitar over the top of that but tuned to Nashville tuning. I learned that from somebody in George Jones' band in San Antonio in 1964. The high-strung guitar was an acoustic, too. Both acoustics were put through a Philips cassette recorder. Just jam the mic right in the guitar and play it back through an extension speaker."

Now, that approach is "rock and roll," and not some silly noodling with an IPad, pretending to be a musician.

It is that reverse pioneer spirit that took the band back to its roots to then move forward with Beggar's Banquet. "Sympathy for the Devil" and "Street Fighting Man" begin the respective sides of the LP in an explosive fashion that would also be employed a year later with each of Let it Bleed's (Decca, 1969) sides introduced the same way with "Gimme Shelter" and "Midnight Rambler," and then again on 1971's Sticky Fingers (Virgin Records, 1971), programmed with "Brown Sugar" and "Bitch." Alto Saxophonist Art Pepper always said, "Never open a set with a ballad" and the Stones took this to heart when putting together the recordings of this period.

And that is how things started, "Sympathy for the Devil." The band would then begin their recreation of America's music, in the process transforming it into the universal. The blues Delta/Chicago of "Prodigal Son" and "Stray Cat Blues," the country funk of "Dear Doctor" (the prelude to "Sister Morphine") and "Factory Girl," and the sheer folk of "No Expectations" and "Salt of the Earth" would be built upon over the next four years until all of rock music would be changed forever. Happy Golden Anniversary,