Aaron Germain: Before You Go

By BRUCE LINDSAY
January 30, 2010
Sign in to view read count 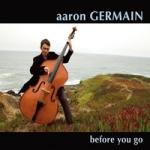 The key to the eclecticism of Before You Go, bassist Aaron Germain's first album as leader, can be found in his stated aim as a musician: to be "picky about quality, not genre." Germain's ten original tunes take in straightforward hard bop, blues, Latin and funk styles—and the quality is always high.

Throughout the album, Germain's compositions take center stage. While the quality of his playing is obvious, Germain never uses the tunes simply to demonstrate his talent—neither does he push his own instrument too far to the front of the mix. The result is a beautifully balanced recording that gives all the musicians space to play.

Germain's core trio—Matt Clark on piano, Bryan Bowman on drums and Sheldon Brown on tenor sax—work perfectly with the bassist to create some excellent performances. Opening tune "Higashi Nakano" offers a prime example, with Germain and Bowman underpinning a delicate piano line from Clark before Brown enters with a smoky and sultry tenor. Germain adds a selection of guest musicians elsewhere, each one ensuring that their involvement adds to the atmosphere and authenticity of the tune. The finest example of this open approach is "Bellabou Baiao," a joyous tune driven by Germain's bass guitar and the dual accordions of Adrian Jost and Colin Hogan. Reminiscent of Hermeto Pascoal in its insistent, atmospheric and upbeat melody, its impact is immediate.

On the funky "Deep Breath" Germain again moves over to electric bass while Clark trades his piano for electric keyboards. Initially the musicians' virtuosity is to the fore, but there is a slight lack of warmth in the sound compared to their acoustic playing. Before long John Gove and Derek Smith enter on trombone and vibes. As a result, the warmth returns in spades, the guest musicians building up a solid groove over Bowman's driving percussion.

Germain is a busy and experienced "hired-gun." Before You Go demonstrates his ability as a writer and bandleader and clearly sets out his potential—it's a lovely album, imbued with talent, imagination and humanity.

Title: Before You Go | Year Released: 2010 | Record Label: Self Produced