Noah Preminger: Before The Rain

By MARK CORROTO
December 30, 2010
Sign in to view read count 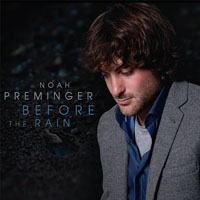 How do you follow up one of the finest debut jazz albums of the new millennium? For saxophonist Noah Preminger, you pair down the sextet heard on Dry Bridge Road (Nowt Records, 2008) and display more of your own sound.

The twenty-something saxophonist returns with bassist John Hébert and pianist Frank Kimbrough on his Palmetto Records debut, Before The Rain (maybe a play on John Coltrane's "After The Rain"), along with everyone's favorite drummer, Matt Wilson. The quartet gambles the entire session here, playing mostly patient ballad, but with such strong players the risk pays off, with a rich sound and drop-dead gorgeous music.

The disc opens with Rodgers and Hart's "Where Or When," from the 1937 musical Babes In Arms. Although the track has been covered by everyone from Duke Ellington to Dean Martin, Preminger possesses it with his gentle breathy tone, played over Kimbrough's simple accompaniment. What the young saxophonist accomplishes in the short 2:19 song is the work of a lifetime. There are bits of Coltrane and parts of Stan Getz, along with slices of Dewey Redman. That Redman connection is also heard on Kimbrough's tribute to the departed saxophonist, "The Quickening," with Wilson (a former Redman band member) dancing around the melody as all the players take smart yet economical solos.

The band continues the same logic, following Redman back to the Ornette Coleman tribute band, Old and New Dreams, and Coleman's composition "Toy Dance." The quartet opens up the framework here, allowing the saxophonist to improvise in his upper register with an unconcerned playfulness. Kimbrough, a longtime Coleman interpreter, catches that same spirit skip dancing a response. This band maintains that joyfulness on "K," a piece that finds Hébert and Wilson working in different time signatures, as Preminger and Kimbrough carry the melody. Impressive stuff, here.

Where Or When; Quickening; Before The Rain; Abreaction; Until The Real Thing Comes Along; K; Toy Dance; November; Jamie.