Beethoven, Barber and Vivaldi at The Jazz Corner 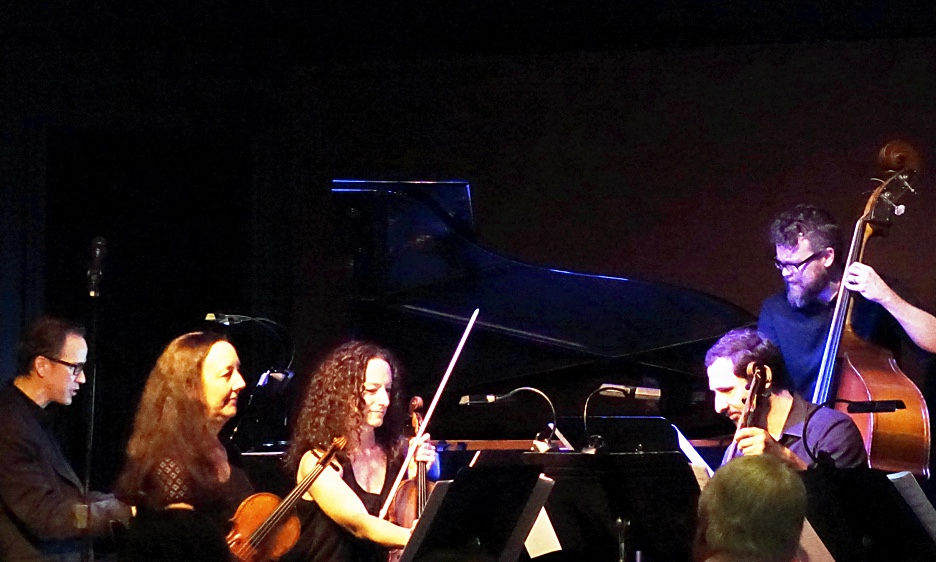 For half a year, this writer has been working with Mrs Lois Masteller, owner of the Jazz Corner on Hilton Head Island SC, and Noel Freidline searching out a way to present classical music fully integrated with jazz inflections. That's not an easy aspiration to fulfill: the history of crossover collaborations has been uncomfortable. Symphony orchestras have invited jazz musicians to sit in, jazz pianists have invited classical violinists or cellists to join them. A complete but still respectful integration of jazz styling into major classical works requires new arrangements of some of the great masterpieces of all time, a daunting prospect for any composer, the more so when approached from outside the classical source genre.

The first step was to agree on our artistic goals. Then, of course, a composer of considerable standing and abilities had to be found, someone brave enough to undertake this mountain of work. The Beethoven alone ran to over 800 measures. Noel Freidline accepted the task, tempted by the challenge.

In order to invent a respectful arrangement of the classical pieces, an early invitation to a classical quartet to share the process was critical. Happily, Jane Brendle was known to the Jazz Corner and Noel Freidline through her husband Ron Brendle, who for many years played bass for Mose Allison. In her turn, first violinist Ms Brendle introduced a second violin, a viola and a 'cello, all colleagues who perform together with the Charlotte Symphony Orchestra. The selection of some of the biggest, most popular pieces in the classical repertoire was deliberate. The audience was sure to immediately recognize the themes as they appeared. For further authenticity, the musicians decided to play without sound system in the acoustically balanced Jazz Corner room. Billy Thornton on bass did, however, need an amp to round out any thinness in the strings and the piano had some help, too. The violin speaking only to the right caused the concert master some eye contact problems with the leader putting this complex ensemble on the edge of needing a conductor, but the musicians' flexibility and determination carried them through.

First, the group played three of Antonio Vivaldi's "Four Seasons" ("Winter" is illegal on Hilton Head). Next (at thirty-nine minutes in the recording) came the mournful and somber "Adagio for Strings" by Samuel Barber from West Chester PA. Then (at fifty-two minutes) they played Beethoven's majestic 5th symphony. Finally (at an hour and eighteen minutes) came the somewhat-Pachelbel "Canon over the Rainbow" The language of music from Germany, from Philadelphia and from Italy all played in an American jazz accent.

Noel Freidline wisely chose to have the classical musicians do the heavy lifting. They have worked with this music all their professional careers and know each note intimately -where it fits and where it leads. His arrangements of the jazz elements placed the musicians in his trio strategically. Billy Thornton ran the bass line and boosted the roundness and depth below the strings, Al Sergel ran percussion alongside the themes as rhythmic guide, swinging where indicated and finally Noel Freidline himself on piano wove lines above the melody as well as delivering his own sparkling jazz piano solos. So the original score was wrapped around with jazz rhythms gently changing its appearance and complexity without touching on its core which was carried by the classical musicians.

Noel Freidline worked every spare moment all through the summer on the arrangements, holding separate rehearsals in Charlotte with classical and jazz musicians until they came to a final rehearsal to fit all the parts and pieces together. They were ready for a lunch concert celebrated at The Jazz Corner on Sunday September 9th, 2018. A fine three course lunch, each course paired with selected wines, elevated the atmosphere to an exalted level for this premier of classical music re-imagined into a new style. David Masteller made a video available for those people unable to get tickets, which were sold out within days.

Even when united by the common language of music, it's no small thing to infuse jazz into classical masterpieces, but Noel Freidline managed a smooth integration without upsetting the original dynamic. Rather, he invigorated the themes, bringing new energy by respectfully crossing the Rubicon into the heart of classical music. All but the wealthiest symphony orchestras search continuously for new markets to supplement their audiences and revenues from the classical repertoire. Some turn to "pops" programming, where many pieces played by large orchestras lose the original verve and raw energy which first propelled them into the collective musical consciousness.

One thing is certain: guests left The Jazz Corner enthused by the music having rewarded the arranger and musicians with two standing, roaring ovations and even a few tears for the sheer beauty of Barber's "Adagio."