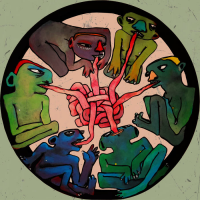 The closing minutes of Ebi Soda's Bedroom Tapes perfectly demonstrate the album's strengths and weaknesses. "Daughter of Doris" opens with an invigorating mix of bustling rhythms, powerful piano chords and an earworm trumpet melody, all layered over soft, electric guitars. Gradually, the song loses momentum as its lack of any impressive performances or compositional shifts leave the track feeling woefully incomplete. This lack of fulfillment will most likely become familiar during repeated listens to Ebi Soda's debut album. This Brighton jazz-fusion outfit displays a dizzying amount of potential through soundplay and production across Bedroom Tapes, only to waste it on tedious songs.

Ebi Soda, a quintet featuring trombone, bass, keys, drums and guitar, often accompanied by saxophone and flute, established their blend of moody soundscapes and unexpected hip-hop rhythms on their self-titled, self-released EP, released earlier in 2019. While the four tracks on "Ebi Soda" only introduced their sound, the best tracks on Bedroom Tapes develop it by weaving surprising sounds into lovely soundscapes.

"Libre" instantly captivates with its propulsive drum beat and sparse keys, then gradually blossoms into a tapestry of spacey trumpets, warm basslines and warping guitar leads before a delicate guitar solo acts effortlessly transitions into a final chorus. The track's conclusion is psychedelic, with watery guitars melting away while one last trumpet note echoes off into silence. "Lake" creates an equally dreamy palette with brittle drums, soft guitar chords and shimmering keys. Featured singer J Harli avoids reaching for any impressive range or presence, instead simply complementing the track's dense atmosphere with his breezy tone. The track builds into a beautiful climax with a soft trumpet solo over layers of ambient noise, strings, guitar and vocal riffing.

Ebi Soda's gorgeous sounds fall flat when they are not built onto solid songs, and the catchy melodies and satisfying progressions of "Lake" and "Libre" are rare on Bedroom Tapes. In fact, those two tracks out of seven are the only ones to display beautiful timbres without distracting arrangements and mind-numbingly simple structures.

"Dimmsdale" opens with promising sounds, including a neo-soul synth lead and expressive funk basslines, and experiments with some promising rhythmic variation, silencing the band for a few moments to highlight the hook's bass line. The song stumbles when the band refuses to let the synth solo breathe and develop, burying its climax under a final hook. Ebi Soda should have extended the short song and allowed the solo to breathe, instead of rushing it towards a muddled conclusion. "Daughter of Doris" closes the album with an equally disappointing structure. Although the track has a midsection which shifts the arrangement to showcase the bass line and backing guitar chords, the track features no standout solo or surprising variation to give it any of the energy that its upbeat rhythms and strong melodies suggest.

This lackluster debut album could nonetheless launch a long and fulfilling career for Ebi Soda, since it features enough impressive soundplay to catch the attention of fans keeping their fingers on the pulse of underground jazz. But unless you can happily wade through boring songs to reach those sounds, feel free to skip Bedroom Tapes.