Trophies: Become Objects of Daily Use 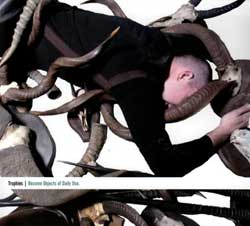 Alessandro Bosetti is repeating. Just as he phrased it on his previous Royals (Monotype, 2010), he is "gloriously repeating." The Italian musician, composer and sound artist continues his loop compositions with the assistance of Japanese fretless guitarist Kenta Nagai and Australian drummer Tony Buck.

Bosetti's method—rapidly becoming a signature sound—is to map the musical profiles of spoken word, poetry, or his own non sequitur speech and transcribe the rhythms, pitch, and notes to be played and replayed as a continuous circle of sound. As his methods have progressed from the very simple origins on Her Name (Crouton, 2007), he has added layers of complexity and sound—and, here, improvising musicians.

As the simple phrases from the classified ads on "Hotels Are Ripping You Off In D.C." are sung/spoken repeatedly, they begin to lose their face value. Soon the words become just part of the music, the energy, and atmosphere. This phenomenon turns standard English into a foreign language. The repetitive nature of the compositions is second nature to Buck, best known for his work in The Necks, an improvising trio that builds hour-long, trancelike songs with subtle gestures and micro- changes. Together with Bosetti and Nagai, Buck feeds the seemingly continuous loops' rather randomly selected lyrics.

Trophies also exists as an evolution of Bosetti's looping conception. The addition of Buck and Nagai adds the outside influence of improvising musicians. While Nagai can also play Bosetti's speech patterns note-for-note—and he often does here—the guitarists can also supplement, slipping notes and fuzz here and there. Likewise, Buck can walk simpatico with the loop on "In The Backseat Listen To Him Talk," comment with his cymbals, or aggressively churn out beats to "Let Me Take Out The Dog."

As the disc progresses, the disintegration of this concept yields increasingly more complex and interesting results. The final two tracks explode the loops, with the instruments overshadowing the lyric, and the mapped looping abandoned for a more open and freer sound.

This Is Not The Same As Chanting; He Was A Very Foxy Gentleman; Hotels Are Ripping You Off In D.C.; He Came Close To Simply Proceeding; Enumerating Issues Of Coexistence; In The Backseat Listen To Him Talk; Let Me Take Out The Dog; Spaceship.