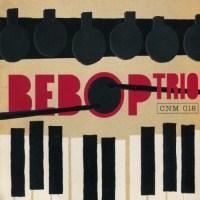 The theme of "walk, don't run" occurs throughout the entirety of Bebop Trio, a suite of improvisations on the sometimes pell-mell music of Herbie Nichols, Lennie Tristano, Elmo Hope, Bud Powell, George Shearing and Duke Ellington. Played by three accommodating and adaptive musicians, the familiar and frenetic becomes casual and conversant.

Where Powell's "Celia" is usually consumed with a bebop pulse, the trio skirts the conventional approach, serving the meal as mere aroma, though there is quite enough sense recognition to identify the music. Indeed, that is the prowess of this endeavor. These three players operate on such a cooperative and collective manner, that their improvisatory explorations never dead end. Tristano's "317 East 32nd" glides in on some dissonance, only to unfurl a much gentler, sympathetic version of the tune.

The trio prefers its bebop to be chamber jazz; certainly, addressing the music with clarinet/piano/drums much like Benny Goodman's trio work adds to the mischievousness. Alec Spiegelman, eschewing his saxophone here for the more conservative clarinet, boosts the contributions from pianist Lefteris Kordis and drummer Thor Thorvaldsson, who is free to accent with cymbals or emphasize notes with a rattling pulse, like a gentler version of Han Bennink.

Resurrecting Hope and Nichols' music here is a wondrous tribute to these still-neglected song writers. Nichols "Change of Season" and Hope's "Boa" are both (re)introduced as gentleman's melodies, as are the trio's recovery of Ellington's "Zurzday" and Shearing's "Conception," both re-imagined as beautiful dreams.