"Bebop" from Taylor Made Piano

By AAJ STAFF
June 2, 2005
Sign in to view read count
By Billy Taylor 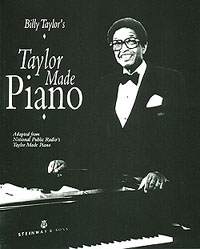 Originally published in 1982, this book is an invaluable and popular resource for both music students and professional musicians alike. Billy Taylor conveys the history and development of America's classical music, jazz, through a unique perspective—that of practicing musician, jazz pianist and educator. This excerpt is taken from the chapter on Bebop.

Bebop was the next step in the evolution of Jazz. The most musically complex style to crystallize in the 1940s, bebop (sometimes called rebop in the early years), was the result of several years of experimentation on both the individual and the collective level by a diverse group of Jazz musicians coming from various parts of the country. They were not content to confine their creative effort to the parameters set by the big bands of the 1930s and the soloists who were limited to that style of playing.

Though their experiments were heavily influenced by the transitional prebop musicians, the new generation of jazz artists sought to redefine the relationship of the instruments in the small ensemble as well as to expand the responsibility of the soloist in terms of the musical direction a performance could take. The bebop soloist had to be superb technician who could execute intricate spontaneous melodies as well as play extremely difficult preconceived melodic lines in strict unison with other instruments. 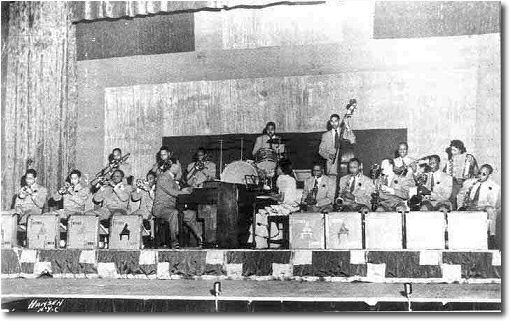 The Earl Hines band was one of the big bands that allowed Dizzy Gillespie and Charlie Parker to interject their concepts into a regular performance, but the music did not really crystallize as a style until the compositions of Parker, Gillespie and Monk, and the other architects of the style began to infiltrate the common repertory...

These imaginative and talented "rebels" enlarged the scope of jazz melodically, harmonically and rhythmically. They radically altered its sound with their longer, more complex melodic lines, their use of the upper partials of ninth and thirteenth chords, together with unusual intervals, passing notes, and polyrhythmic figures.

All of these devices had been used to some extent in earlier jazz styles by Willie "The Lion" Smith, Earl Hines, and Art Tatum; but World War II was ending, and many musicians now joined forces to develop a style which was relevant to their creative needs. The result was bebop.

Like the styles of jazz which preceded it, bebop owes much of its development to the spirit and ingenuity of the jazz musicians of the 1940s to whom improvisation was an essential part of jazz playing. They considered improvisation the best way to express the essence of a given composition in an unrestricted, yet creative way. Improvisation enabled them to retain the spontaneity that, in their opinion, was lacking in the swing band arrangements and the styles that were compatible with them. 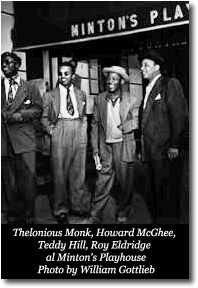 The basis of improvisation in the bebop style was the extension of traditional jazz practices. The player altered, or revised, the composition being played and developed its rhythmic, harmonic, and melodic potentialities within a preconceived musical concept without losing the feeling of spontaneity and immediacy. As in any good jazz improvisation the feeling of spontaneity was mandatory whether the performer was creating an original composition based on the thematic structure of a popular song or re-creating a sequence of melodic, harmonic, or rhythmic ideas originally conceived by a bebop musician.

Despite the frequent use of double time, polyrhythms, syncopations, and usual accents, the best bebop players always maintained a beat which was relaxed and which had the natural feeling of a swinging pulse. This was their way of carrying on a jazz tradition which has been respected since the earliest days of ragtime. No matter how syncopated or intricate a jazz passage may be, the basic beat must never lose its vitality. It must swing or it is stylistically incorrect. In each chronological style of jazz, the rhythmic approach is different.

Because I purposely lived one block from Minton's, I spent a lot of time there jamming and sitting in on rehearsals. I learned the latest tunes and bebop harmonic progressions from Dizzy Gillespie and Don Byas and began my own experiments with the new rhythms. I had a serious problem, though. Because I wanted to retain the pianistic patterns and devices I had learned from Tatum and combine them with bebop, I was not prepared to play in the percussive, hornlike style being developed by Bud Powell and others. I knew these styles were somewhat compatible, but like Hank Jones, George Shearing, Al Haig, and others, I had to work it out for myself. Jam sessions were helpful because they not only gave me a chance to play the style but also gave me a closer look at the vocabulary as used by Fats Navarro and many of the best bebop players.

In my early days on Fifty-Second Street my style of comping (accompanying) caused me a few problems. I had listened to Duke Ellington and Nat Cole and developed my own orchestral style of comping instead of following the traditional one.

This style working well with guitarists and some horn players, but others complained that it got in their way and restricted their solos. I was persistent however, and on my first record date as a leader, I included "The Mad Monk," a quai-bebop tune I dedicated to Thelonious, which featured this concept in the melody.

This excerpt is taken from Billy Taylor's Taylor Made Piano. The book includes an overview, a focus on important musicians, photos, musical notation, and a discography. It features a Glossary, a list of Additional Resources for the Study of Jazz Piano Styles, and, Resources for Improvisation Techniques and Piano Styles.