By DAVID ADLER
November 1, 2000
Sign in to view read count 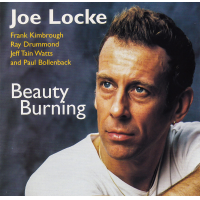 Vibraphonist Joe Locke and pianist Frank Kimbrough have a developed a camaraderie that was well documented on 1999’s Saturn’s Child. Beauty Burning is the next chapter in that fruitful relationship, but this time bassist Ray Drummond and drummer Jeff "Tain" Watts join the party. Guitarist Paul Bollenback also appears on three tracks. Kicking off the session with Chick Corea’s up-tempo "Litha," Locke launches right into his furious lines and weaves them through the tune’s complicated form. His intensity remains at a high level on Darrell Grant’s R&B-flavored "Twilight," Ray Drummond’s medium-slow hard bop chart "I-95," and Locke’s closing Latin/swing romp "Rasputainian Dance," the last of which features a particularly hot solo by Bollenback.

Bollenback’s acoustic guitar is a nice touch on Kimbrough’s "Quiet As It’s Kept," a composition that appeared — quite differently — on the pianist’s album Noumena. Similarly, Watts’s "Pools of Amber," originally recorded in trio with the late Kenny Kirkland on Citizen Tain, appears here as a beautiful quartet piece. Locke and Kimbrough bring back the sparkling textures of Saturn’s Child with a duo reading of "Where Is Love," a ballad from the film Oliver. The most serious magic, however, happens on Locke’s "Somewhere Waiting." Kimbrough reaches great heights during his solo and is cleverly featured playing the catchy riff alone toward the end of the song.

Locke is a fiery and speedy player, tremendously exciting to listen to. But he also knows how to coax lyrical possibilities from every tune, and how to feature his band to full effect.