By PATRICK BURNETTE
May 8, 2018
Sign in to view read count 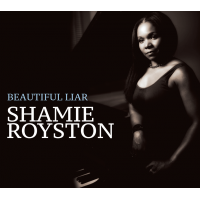 Shamie Royston has played with Tia Fuller, Ralph Peterson, Sean Jones, and Terri Lynne Carrington, so her credentials are well up to spec, but the glamour-shot artwork and album title ("Beautiful Liar," at least to this writer, suggests a quiet-storm vibe) might lead one to assume that Royston's second date as a leader is an overly-polished recording from the lighter side of the spectrum. Don't be fooled: Beautiful Liar is an exceptionally accomplished and engaging post-bop album. It's beautifully recorded but not cocooned in studio gloss, beautifully played but not so cautious or mainstream that the sound of surprise goes missing. Beautiful Liar never turns po-faced or pallid: it's a delightful jazz recording by any standard.

Post-bop jazz composers sometimes avoid familiar cadences so carefully they drain their music of forward momentum. Royston's songs, in contrast, keep the spark of inward musical necessity burning even in their most complex and sinuous moments. Royston's not a penner of hummable melodies (the sole cover—Bill Wither's "Lovely Day"—is the most immediately catchy tune on the album), but she crafts music that compels the ear and inspires the soloists. Every song on this album knows exactly what it's about and lets the listener know too. On the evidence of this outing, Royston possesses the rare and unquantifiable gift that separates a good—even great—composer from a merely competent one.

Royston is a fleet pianist who solos outside the lines often enough to not recede into the background, and the other musicians on the date provide excellent ensemble playing and improvising. (Interventionist but never excessive drumming by Rudy Royston certainly helps propel things.) The great strength of the album, though, is its careful balance of structure with space for self-expression, its almost perfect management of tension and release. For a taste of Beautiful Liar at its most accessible, listen to "Lovely Day" and note how Royston's inventive arrangement never gets too complex or clever for its own good. Then listen to the following track—"Circulo Vicioso"—which employs unusual meter and an almost pointillistic arrangement but engages the listener on a visceral level rather than just trying to impress. (Royston's chops on this particular tune are impressive, but her playing is an integrated part of the performance rather than mere flaunting of technique).

Jazz this challenging is rarely this fun—and vice versa. You may not recognize her name, but if you like modern jazz you'll be surprised just how much you enjoy Shamie Royston's Beautiful Liar.