Be Inspired, Stay Focused: Creativity, Learning, and the Business of Music 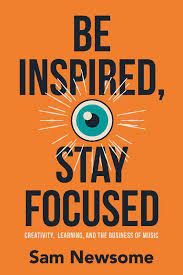 Sam Newsome offers an abundance of ideas, concepts, and guidance throughout Be Inspired, Stay Focused: Creativity, Learning, and the Business of Music. Some of them, like "The Benefits of Slow Practice" and "Ten Reasons You Might Have Trouble with Rhythm," are helpful, somewhat conventional pieces of wisdom that are likely to benefit novice and intermediate jazz musicians. Others, like the one in which Newsome recommends surrounding "ourselves with not just good players, but good players who showcase us in the best light," apply to those who regard jazz as a serious career choice and are looking to make the leap from sideperson to bandleader.

Then there's Newsome's "Creative Box Principle," in which he claims that "having limitations, or very measured parameters to create, can prevent us from arriving at typical outcomes." This is one of many that are geared toward jazz practitioners who are interested in making a big investment in their own artistic vision. Finally, "Think like an artist, act like an entrepreneur," the first of "My Ten Guiding Principles For Success," underlines his belief that the business side of music must be taken as seriously as the pursuit of musical creativity.

About twenty years ago Newsome pivoted from playing tenor saxophone in conventional jazz circles to employing the soprano saxophone in a solo context while exploring ideas far removed from the music's mainstream. It was an arduous transformation that resulted in "more failures than successes." Newsome is happy to share the lessons learned from every misstep, bad gig and creative block, as well as his triumphs.

Despite a wealth of content in under 150 pages, the book isn't overstuffed, academic, or mind-numbingly complex. Newsome's friendly, straightforward writing style and the absence of music theory or jargon welcomes anyone—musicians and laypersons—with an interest in jazz.

Think of Newsome as the professor every aspiring jazz musician would be lucky to have. He's passionate, accessible, idealistic, and hardheaded. It's easy to imagine him entering a classroom or studio and electrifying students with his enthusiasm for the music, encouraging them to reach for the stars, pointing out their performance shortcomings without hesitation, and dispensing insightful advice.

Newsome advocates the discovery and development of an individual's "natural genius"; that is, the "ability to do or understand something that you seem to be able to do better than most—and that feels very natural." However, he never loses sight of the difficulties in the pursuit of "finding your own way," as opposed to settling for the skillful imitation of jazz icons. Creativity, he warns, isn't subject to orderly processes or ready-made formulas. It "can be random, spontaneous, illogical, and beyond our control." Most of all, Newsome asserts, there are no guarantees of finding and realizing one's vision or reaping material rewards. "Striving," he emphasizes, "creates possibilities, not outcomes."

For jazz musicians, the quest to discover one's own "natural genius" doesn't exist in a vacuum or consist of a never-ending immersion in the work of others. Newsome does a brilliant job of describing the constant labor, difficult choices, uncertainty, changes in direction, and failures that are essential components of a life in creative music. He demystifies the process of finding creative ideas by offering two examples from his own experience. First, Newsome's pursuit of creative ideas is not based on "coming up with original thoughts, but seeing the potential in musical ideas many might discard as unworthy of deeper study and exploration." Second, he questions everything, even the smallest aspect of his playing, and looks for "new and under-explored alternatives."

Newsome has a penchant for encouraging the mastery of conventional performance methods and then pointing out their limitations. He insists on a thorough grounding in time-honored jazz practices (swing, the blues, learning tunes, playing a good melody, etc.) but cautions against treating them as a be-all or end-all. In terms of the goal of finding one's own creative voice, clinging to a handful of formative influences, or becoming a jack-of-all-trades are counterproductive. Better to spend time on the development of an individualistic skill set that complements the imagination and "hard thinking." Regular participation in jam sessions serves as a means of learning to survive in the company of peers and finding "the areas in which we are deficient," yet have little to do with inventive pursuits.

A chapter entitled, "The Four Categories of Judgement: Will You Be Ready?," lays bare the expectations for rapid development and the pressure cooker atmosphere in university jazz studies programs. Early on students may get by on their potential alone, but if weaknesses aren't seriously addressed by the second year, the judgments get harsher and the individual's work ethic begins to be questioned. If faculty standards continue to be unmet, a student's stock plummets, and the all-important support system may begin to unravel. "Teachers," Newsome says, "are less inclined to make that extra effort for you, recommend you for gigs, turn you on to recordings, or share special anecdotes with you." A player in this position has been "reduced to the category of 'Just another student.'" By the senior year in university, if little improvement has been made, a student may be regarded as a liability to the institution and graduate with a degree that, without the skills to back it up, is insignificant.

In Newsome's estimation, the realities of trying to survive in the fiercely competitive jazz marketplace of the twenty-first century demand individualistic, inventive, and resourceful business strategies that include a capacity for risk. A do-it-yourself approach to business, including finding your own gigs, regularly making records as a leader, and branding, is essential in an attempt to rise above the crowd and find an audience. Create your own opportunities, but don't obsess over their success. "If one gig doesn't go well, book another." Newsome urges musicians to "have a clear understanding of how our time is being spent, or invested." Working as a sideperson may be a welcome source of income but it doesn't count as a worthy investment in your own artistic vision, something that is distinct enough to be recognized by others.

Perhaps the most impressive thing about Be Inspired, Stay Focused is how Newsome's humanity shines through every idea, concept, and piece of advice. For example, he insists that "Artists create selfishly, but give selflessly." Moreover, he brings home the point that, regardless of an individual's status in the realm of jazz, their work is important. Contrary to those who believe that nothing short of widespread recognition matters, musicians have a profound impact on communities, schools, and families throughout the world. "So, you can see that creating art and being an artist is about doing, sharing and ultimately changing those exposed to your goodwill. Everything else is smoke and mirrors."