Lea Delaria: Be A Santa

By BRUCE LINDSAY
November 8, 2010
Sign in to view read count 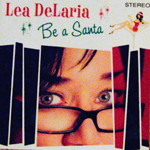 Christmas can do strange things to musicians: there are plenty of artistic car crashes littering the road to Santa's Grotto. But sometimes an artist gets it right, by luck or by design, and a Yuletide project endures for many years. Vocalist, comedian and Broadway performer Lea DeLaria is, happily, in the latter camp with Be A Santa, an album full of festive standards that swings like a sleigh bell on a Christmas tree and entertains in stylish fashion.

DeLaria, whose Play It Cool (Warner Brothers Records, 2001) was The Times' Jazz Album Of The Year, has taken the eminently sensible step of surrounding herself with some of the UK's finest jazz players. Pianist Janette Mason, excellent throughout, co-arranged the tunes with DeLaria. Their intention, according to the singer, was to recreate the feel of '50s and '60s arrangements and they succeed admirably—authentic, respectful but not too reverential.

Like most Christmases, the album has a couple of less-than-magical moments. The instrumental version of "God Rest Ye Merry Gentlemen" sounds too much like a brass band Dickens Christmas for comfort (despite Simon Little's excellent bass lines and Martin Shaw's lively trumpet solo), while DeLaria's vocal on Lee Mendelson and Vince Guaraldi's "Christmas Time is Here" occasionally sounds uncharacteristically tentative. But for the most part the bands bring freshness and originality to these often hackneyed old songs.

DeLaria makes the most of her vocal power on Frank Loesser's bluesy "What Are You Doing New Year's Eve?"—the tune also features Mason's funky and confident Hammond playing. Betty Comden, Adolph Green and Jule Styne's "Be A Santa" finds the singer at her most expressive—the way she phrases "jolly" is a joy. On Felix Bernard and Richard Smith's "Winter Wonderland" her vocal is slightly mellower, with a real sense of looking forward to the snowy weather. DeLaria and Mason give Irving Berlin's "White Christmas" a more upbeat and energetic arrangement than usual: Anthony Kerr contributes a lyrical and bright vibraphone solo while DeLaria adds some scat and closes the track with a festive "Ho, Ho, Ho."

DeLaria and Mason co-composed the only original tune: "A Modern Christmas Tale," which the singer describes as their "Trojan Horse of a track." It's a stunningly accurate take on a '50s Christmas song: indeed, until DeLaria sings about credit cards, parking problems and bling, it could readily pass muster as a song from a Perry Como Christmas Special.

Be A Santa is very definitely a Yuletide album, but it's not one that should be consigned to oblivion for the remaining 11 months of the year. The arrangements and the performances have a quality that ensure the tunes will be just as welcome on a cloudy and wet September evening—after all, a good song isn't just for Christmas.

Santa Claus is Coming to Town; What Are You Doing This New Year's Eve?; Winter Wonderland; Sleigh Ride; Christmas Time is Here; God Rest Ye Merry Gentlemen; A Modern Christmas Tale; The Man With The Bag; Be A Santa; Have Yourself a Merry Little Christmas; White Christmas.