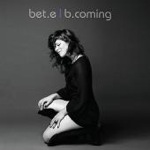 What a joy it is to witness the becoming of an artist—the singular process of a talent developing, verging on a breakthrough. A maturing voice rising through the jumble that are ghost influences, past collaborations, and the sometimes inconclusive artistic decisions that comes with learning and trying to advance one's career.

Well on her way is French Canadian singer Bet.E (born Elizabeth Provencher), who first garnered attention as one half of Bet.E & Stef, the Montreal, Canada-based Neo Bossa Nova unit she co-led with guitarist/singer Stephane Carreau. Two albums in with Carreau—the last of which was released under the prestigious Verve label—the placid chanteuse split in late 2003 to launch her solo career. She returns with b.coming, a diversified record showcasing her sleek, suave vocal style, but one that unapologetically breaks from the Bossa Nova mold with poppier, contemporary-sounding tracks.

With its jazzy, Bruce Hornsby-reminiscent feel, "Omigod" is one of those tracks where her sensuous phrasing and tone espouse a funkier tangent. Other compositions such as "Encore," a typical AC radio-friendly song, as well as the groovy, all-French lyric "Les Histoires," also veer towards overtly commercial formats—which remain a not unthinkable future direction for the charismatic singer.

In fact, this foray into commercial genres causes some minor production issues (Provencher produced the whole record herself at home), sequencing being the most obvious. More, it aesthetically displaces focus away from the many delectable moments such as the entertaining "Eu Quero Um Samba" and the flute-filled "Feminina" with its superb nylon-string guitar solo. In instances where she arrives at combining both aesthetics into a single production—such as in Baden Powell's "Canto De Ossanha"—the end results are found to be not at all displeasing even if somewhat remote from more classic performances.

Notwithstanding its lack of focus and occasional conspicuousness, b.coming remains an outing likely to be enjoyed by music fans and general audiences alike.