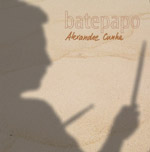 Brazilian music must be among the happiest in the world, as its rhythms sway in the soft breeze of Rio. Of course, it's more than just bossa nova or party music, and Batepapo is a virtual primer in its many different rhythms and melodic styles. Alexandre Cunha, an endlessly inventive master drummer, drives this music with a light but forceful touch. Even listeners who are not particularly attracted to so-called world music that is based predominantly of rhythmic forms, forgoing melodic and harmonic complexity, will be pleasantly surprised by the sophistication of this recording.

Cunha seems to have a wide circle of musical friends, and many musicians play on the record in different formations, but the standouts are Mareclo Martins (saxophones), Arthur Maia (bass) and Mauricio Piassarollo (keyboards). The record is a real group effort, however, and the camaraderie is immediately apparent from the first note to the last.

Surprisingly ingratiating, with superior musicianship, Batepapo is an wonderful entrée into the world of Brazilian music.