By MARK CORROTO
February 11, 2011
Sign in to view read count 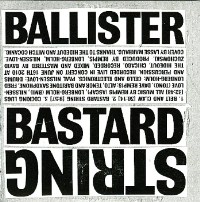 There is something special about watching jugglers perform. It is a marvel how the juggler can seemingly interrupt the laws of gravity at will, keeping balls (or chainsaws) suspended through sheer tenacity. Such it is when listening to Ballister perform the three lengthy improvised pieces on Bastard String.

As the juggler doesn't rely on willpower to perform his visual feats, neither do saxophonist Dave Rempis, cellist Fred Lonbeg-Holm, and drummer Paal Jorrit Dijkstra. These three improvising artists have been the foundation of some today's innovative jazz outfits. Rempis in his own Percussion Quartet, The Engines, and along with Lonberg-Holm in The Vandermark 5, a mainstay of the Chicago jazz revival. The cellist's main outlets are his Valentine Trio and The Lightbox Orchestra, plus various groups led by Keefe Jackson, Peter Brötzmann, and Jorrit Dijkstra. Perhaps the bonding glue or lead juggler here might be Nilssen-Love. The drummer, who is best known for his bands Atomic, The Thing and his duo sessions with the likes of Mats Gustafsson, Frode Gjerstad, Magnus Broo, and a half of a dozen other giants, drives this session with unending energy and a persistent attention to flow.

Recorded live in June 2010 in Chicago's The Hideout, the two intense thirty minute plus tracks "Belt And Claw" and "Cocking Lugs" bookend the more open ten minute title track. Even when the foot is taken off the accelerator here, the prestidigitation is still present. As with all excellent improvisation, the process is seamless, whether the trio is intertwining the cellist's electronics with the drummer's ride cymbal or whether they are burning up the stage to some old school energy jazz. The illusion created here is of controlled chaos where themes emerge from the wall of energy and the band directs the current. In both lengthy pieces the barrage slows or actually stops, reorganizes as if to assure the band that the audience is still with them, then continues with their onslaught. Ah, such sweet ferocity.