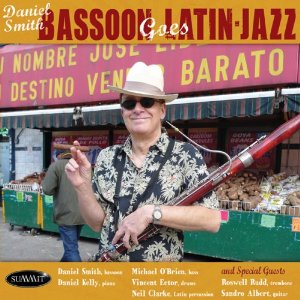 It's about that sound—that down there, frog-like bellowing encountered on cartoon soundtracks, novelty TV commercials, and that marvelously masculine sound heard in the greatest of orchestral and chamber music repertoire. Rarely is the bassoon heard blowing improvisation in the jazz idiom, athough with the works of Daniel Smith, Paul Hanson and others, that's changing.

Placing Smith's bassoon in the midst of some marvelous Latin players within an array of well-known jazz classics works exceptionally well. But, rest assured, while the tunes are pulled from the bedrock of commercial Latin Jazz, this is not a background party CD, or some insincere effort at flattering the genre, though it sure is fun.

Jumping right into the fire with Lee Morgan's fine, but not frequently heard "Mr. Kenyatta," Smith's bassoon fireflies over the pulsing rhythmic bed laid down by Vincent Ector's drums and Neil Clarke's Latin percussion. Smith's improvisations, while limited a bit by the timbre and facility inherent the instrument, float nimbly over it all. A virtuoso on the double-reed instrument, Smith's shorter bursts peck and claw along with the excitement funneled up by this terrific rhythm section, which also includes bassist Michael O'Brien. Trombonist Roswell Rudd guests on Herbie Hancock's "Watermelon Man," his funky, ripple-tongued solo working perfectly with the arrangement's not-taking-itself-too-seriously approach.

Smith's singing out on Eddie Harris's "Listen Here," is so darn catchy that it's got TV Show Theme all over it. This is certainly the "take away and hum" cut on the disc. Pianist Daniel Kelly punctuates beautifully over the drone and O'Brien funks large. "Come Candela" and "Mambo from the Dance at the Gym," from West Side Story, also shine.

Smith's send-up serenades on "Black Orpheus" and "Peace" slow the pace down to frame his beautiful operatic timbre. Romantic bassoon? You bet. It's here that Smith's bassoon really shines. Even Dizzy Gillespie ("Manteca") and Charlie Parker get nods (with cute Bird quotes on "Yardbird Suite"). But, unlike speed-of-light alto and pyrotechnic trumpeting, the bassoon's lower pitched realm just doesn't make it at faster tempos here and on the following tunes, "Korg In" and "The Chicken."

The rhythm section is just wonderful, supporting Smith with unrestrained fire throughout, and energy that sizzles across virtually every cut.