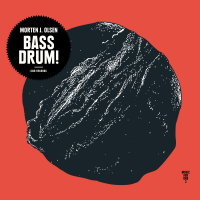 Norwegian, Berlin-based percussionist Morten, J. Olsen's debut solo album demonstrates how far and advanced his instrumental vocabulary has become. Olsen was part of the high-energy duo MoHa, with guitarist Anders Hana, which later evolved to the powerful quartet Ultralyd, founded by legendary reeds player Frode Gjerstad. After moving to Berlin he became a member of Splitter Orchestra, a 25-piece improvising collective and recently began to perform as a techno DJ.

Bass Drum! features Olsen's instrument of choice in recent years. Olsen has an impeccable command over the 32" rotating bass drum and an exceptional affinity for sonic exploration. In his hands this drum becomes an orchestral instrument with a highly original and an arresting sonic universe of its own. Moreover, from what seems to be limited means, Olsen creates new ideas, definitions, and sounds of what percussion music or rhythm is and can be.

Like other innovative percussionists as Norwegian Ingar Zach or Japanese Tatsuya Nakatani, Olsen refuses to employ the drum as a drum only. He employs extended techniques including different tunings of the skin of the drum. He applies different percussion objects on the skins surface and its metal boundaries and explores different aspects of the timbre, pitch, resonance, dynamics and the relationship of the produced sounds to space.

Each piece investigates a distinct approach of playing the bass drum, turning these carefully nuanced pieces into rich, colorful textures. Olsen stresses a contemplative spirit on "Ejected objectives," buzzing drone on "Rooftop modified algae farm" and "The pressing operation," sensitive play of overtones on "Saw tooth model and nonstandard deviation" or ceremonial-meditative atmosphere on "An extremely cheap sanjo." The longest piece, "Pure tone attraction," is an enigmatic and quiet tone-poem that blurs the distinction between minimalist sound and silence. The last piece, "Objectives/Ejection (Hi-tech dying room)," plays imaginatively with the space and the kinetic characteristics of the spare, resonating sounds within this space.

Brilliant and visionary work of art.