Count Basie Orchestra: Basie Is Back 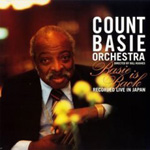 No, the Count isn't literally back... in fact, he's never really been away, as the Count Basie Orchestra has kept rolling along under a series of leaders since Basie's death in April 1984. This latest incarnation, directed by the Count's longtime bass trombonist Bill Hughes, was recorded in concert in October '05 at Denryoku Hall in Sendai, Japan. Following in the footsteps of Basie's Old Testament and New Testament bands, Aaron Woodward writes in his liner notes, "We are calling this the 'Born Again' era of the Count Basie Orchestra.

Having seen the orchestra in person less than a year ago, I can bear witness that the music on offer is rather typical of what one would hear at any of the couple hundred concert dates the band plays all over the world in a given year. Included are Basie classics by Freddie Green, Frank Foster, Ernie Wilkins, Frank Wess, Neal Hefti and the Count himself, interspersed with vocals by Melba Joyce ("Body and Soul, "Lover Come Back to Me ), songs by Ellington ("In a Mellow Tone ) and the Duke's sax section anchor, Harry Carney ("We're in Love Again, a handsome showcase for baritone John Williams) and the inevitable encore (and Basie's most celebrated success), Wild Bill Davis' inspired arrangement of the standard "April in Paris ("one... more... time! )

While one can certainly argue the merits of "ghost bands and their place in the musical universe, there's no debating the fact that the present edition of the Basie Orchestra is a first-rate ensemble that does nothing to tarnish the Count's image. True, the Kid is no longer there to count off the tempos, and his legendary soloists and sidemen are long gone as well, but the Basie legacy is nonetheless in capable hands with Hughes and his (relatively) young cohorts. When the Count was alive the orchestra had a number of superlative drummers, most notably Jo Jones, Sonny Payne and the present occupant of the drum chair, veteran Butch Miles, who makes sure the rhythm never falters and is featured prominently on Hefti's high-flying "Whirlybird.

With Miles setting the compass and pianist Tony Suggs offering a respectable impression of the Count, the orchestra need only give these time-honored charts due diligence, which with these gentlemen is a given. Although some may wish to hear more up-to-date compositions and arrangements, Hughes and the others would no doubt answer that they are simply giving the audience what it wants. There's certainly nothing wrong with that, but potential listeners should be advised that this concert performance, even though taped only two years ago, is vintage Basie in a newly wrapped package.