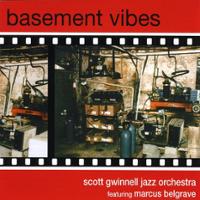 Pianist Scott Gwinnell’s music is ambitious, which is not the same as impersonal or boring — but it does require one’s earnest consideration, as the wandering mind may overlook some of the myriad small gems that brighten each of his well–drawn charts. Gwinnell arranged every song on Basement Vibes and wrote five of them including the three–part suite that lends the album its name. While each of Gwinnell’s compositions is first–rate, as is the Detroit–based orchestra that plays them, he’s even better when reconfiguring more familiar material, in this case Jule Styne’s charmer, “It’s You or No One,” and a pair of Jazz standards, Cedar Walton’s “Bolivia” and Tadd Dameron’s “On a Misty Night.” An exception is “716 Blues,” a straight–ahead homage to saxophonist Frank Foster that would be quite at home in the Count Basie book. The centerpiece is the three–part Basement Vibes suite, the first movement of which, “Imp of the Perverse,” dedicated to bassist Charles Mingus, clearly evokes his “perverse” musical spirit in a chart that is as rhythmically and harmonically challenging as it is consistently invigorating. The darting solos are by soprano Keith Kaminski and guest trumpeter Marcus Belgrave, one of the area’s Jazz legends who recorded with Mingus and has performed with a who’s who of luminaries from Ray Charles and McCoy Tyner to his baritone–playing cousin, Cecil Payne. The somber second movement, “Lullaby for a Dark Spring” (featuring Mark Byerly’s muted trumpet) was written for Gwinnell’s recently deceased grandmother; the third, “Calamity on Cass,” deftly portrays an incident in which Gwinnell saw a music professor struck by a slow–moving car (he later recovered). The suite is preceded by the breezy opener, ”It’s You or No One,” with further persuasive blowing by Kaminski and Belgrave, and followed by “Bolivia” and “Misty Night,” both charts superbly crafted by Gwinnell. “Bolivia” contains an exciting “duel” between Steve Wood on tenor and Brad Felt on euphonium, “Misty Night” limber solos by Wood and Byerly. Gwinnell’s other composition, “Shriek of the Shrikes,” may not be to everyone’s liking, as it marks his lone detour into fusion, but it’s neatly scored to underline decorous statements from guitarist Matt Thibbideau and bassist Chuck Bartels. We would be remiss were we not to mention the splendid work done throughout by drummer Bill Higgins, the mainspring behind the orchestra’s enterprising rhythm section. He plays light or heavy, as the occasion demands, and always tastefully. The album, we’re told, was recorded with few microphones to replicate the “live” sound of the orchestra’s regular Tuesday evening gig at Detroit’s Cadieux Café. It’s not bad, but not much better than good. On the other hand, the album itself warrants an enthusiastic endorsement.