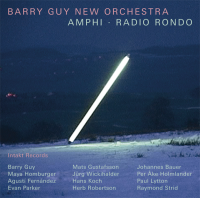 One of the most noteworthy releases of 2013 was the Barry Guy New Orchestra's Mad Dogs (Not Two), a five disc compendium which collected largely freeform meetings between various subsets of the 11-piece company during their 2010 residency in Krakow. However even that copious set offered only a partial view of the Orchestra's range, a deficiency filled by the issue of Amphi + Radio Rondo which should perhaps be seen as a companion piece. Recorded in St Johann in Tirol, Austria in 2013, the session showcases the BGNO's rendition of the two titular charts by the British bassist. Renowned as a composer who makes space for improvisation an integral part of his charts, Guy has followed the template established with Inscape—Tableaux (Intakt, 2001) and Oort—Entropy (Intakt, 2005) by retooling existing works specifically for the BGNO. Influenced by contemporary classicism as much as jazz, the end result is unique to Guy.

"Amphi," which features Guy's partner and baroque violinist Maya Homburger, is based upon the title suite from the couple's marvelous Tales of Enchantment (Intakt, 2012). As such it still retains a chamber ambience, as members of the Orchestra interact with the lightly strung baroque violin in a series of volatile but rigorously controlled encounters, though rarely with the whole group playing at the same time. Standout sections include the alternating unisons and freewheeling exchanges between Homburger and Hans Koch's bass clarinet in which he deploys a stunning assortment of voice-like trills and shrieks, as well as a passage of austere hymn-like beauty for bass and violin. In a virtuoso performance, Homburger makes her violin sing, soar, creak, and even whistle as the track concludes with the highest notes of the violin blending with Paul Lytton's scraped cymbals.

"Radio Rondo" forms a distinct contrast to the opening cut. Although much more orchestral, a similar interchange between the soloist and elements of the ensemble ensues. It first appeared on the album of the same name (Intakt, 2009) by the London Jazz Composers Orchestra, as a showcase for Swiss pianist Irene Schweizer. In this new version for the BGNO, Catalan pianist Agusti Fernandez takes center stage. Behind the title lay the idea that the band had been traveling around the globe since the last concert of the LJCO some ten years previously and their music had been circulating across the world's airwaves. That concept informs the tremendous opening tutti which erupts from nothing, as if a radio has been turned on to reveal the band in mid expression.

Those chaotic blasts of conglomerated mayhem figure as a repeating motif throughout the proceedings, until the conclusion when everything comes to an abrupt halt, as if the radio has been switched off. In between Fernandez ranges from Cecil Taylor like pan tonal verve, to bursts of melancholic lyricism, by way of percussive attack inside the guts of the piano. High points include the pianist's headlong dash with Evan Parker's tenor saxophone, recalling their compelling interplay on The Voice Is One (Not Two, 2012), a sequence of darting arpeggios shared with Jurg Wickihalder's tart alto saxophone, and a stand off with the volcanic baritone saxophone of Mats Gustafsson.

Guy begs the question of what an improvising ensemble in the 21st century can be and provides an answer which satisfies both the head and heart: cerebral yet packing a visceral punch.