By KARL ACKERMANN
February 16, 2019
Sign in to view read count 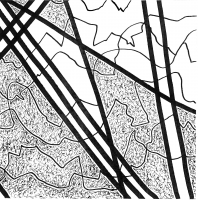 Eli Wallace is best known as the keyboard half of the piano/drum improvising duo Dialectical Imagination with Rob Pumpelly. Listeners familiar with Wallace's work in that setting and with the trio Cataclysmic Commentary, with tenor saxophonist Ben Cohen and Dave Miller on drums, know that Wallace is not averse to swimming against the current. The California native, now residing in Brooklyn, works across genres of improvisation, modern jazz, rock and classical music. He holds Bachelor's and Master's of Music, from the New England Conservatory studying with Jason Moran and Jerry Bergonzi among others. Barriers is Wallace's first piano solo release.

The sole track on the album is the title track; a thirty-seven-minute exploration of the entire instrument, inside and out. Wallace's past works have incorporated melodies in judicious helpings, often seeming to be bridges from one unfamiliar concept to another. There is less of that, compared to the experimentation that dominates Barriers, where resonance and textures guide the direction of the music. Sharply placed chords open the piece but quickly Wallace goes into a muted percussive run of considerable length, reminiscent of Sam Newsome's unusual technique on soprano saxophone. Wallace utilizes silence throughout the piece, adding an episodic quality to the fits and starts. Near the mid-point, the pianist introduces classical elements on the way to atonality, and before exploding into a frenetic passage. Twenty-six-minutes in, it sounds as if Wallace is sawing through the strings, then he abruptly switches to a delicate spray of single notes in the upper register before fading into near silence once again.

Wallace's approach could be described as part Cecil Taylor, part Satoko Fujii, with a touch of Morton Gould thrown in, but that shouldn't imply that his style is anything less than fiercely individual. Wallace has written for jazz, ensembles, chamber groups, orchestra, etc. and his creative flexibility is on full display here as he encapsulates a mélange of interests. Barriers is often intense but there is a built-in tolerance for letting improvisations take their course; the album is always challenging, and, for open ears, rewarding.