By DAN MCCLENAGHAN
November 6, 2012
Sign in to view read count 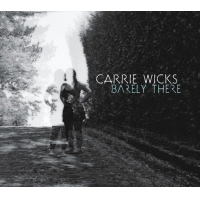 Vocalist Carrie Wicks' debut was 2010's I'll Get Around To It (OA2 Records). She slipped her original composition, the disc's title tune that she cowrote with bassist Ken Nottingham, onto the CD, along with a bunch of well-chosen songs from the 1940s and '50s, with Elvis Costello's timeless "Almost Blue" nudged in there, too. It all fit. It was a classic jazz outing featuring a deep-in-the-tradition singer, with exquisite accompaniment headed up by pianist Bill Anschell-a top debut of the year.

Where her debut featured familiar songs like "I'm Old Fashioned" and a couple of Lorenz and Hart numbers, the title tune was her lone songwriting offering. For her sophomore outing, Barely There, the Washington State-based vocalist has assembled the same top level backing band and drawn again, an interesting array of non-original material. But instead of one Nottingham/Wicks tune, there are eight.

The first five tunes are originals. "Small But Elegant Place" opens the disc, and sets the mood: a classic, small ensemble sound with a very memorable melody and clever lyrics delivered confidently. "Dandelion Gone" has the smooth flow of a bossa nova, and features saxophonist Hans Teuber's cool blowing, while the title tune rolls with a bluesy, after hours feel.

Wicks' take on Townes Van Zandt's 1978 song, "No Place to Fall," showcases her ability to project poignancy and vulnerability, and the familiar Raskin/Mercer offering, "Laura," has Wicks alternating her delivery between horn-like and hushed.

Wicks is a skilled vocalist, top-notch in her phrasing and intonation, but she also possesses an ineffable "something extra" that's both compelling and engaging in its delivery of the stories she has to tell. Maybe it's that she's feeling every word she sings in her heart, projecting a certain joy with every scat syllable, on this, her second outstanding recording.

Small But Elegant Place; Dandelion Gone; Ruse of Roussillon; Winter Skin; Barely There; No Place to Fall; Orchids; Veinte Anos; Laura; No Pollyanna; Through; You Belong to Me; A Kiss to Build a Dream On.