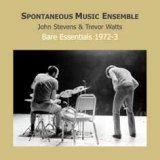 John Stevens and Trevor Watts are vitally important in the history of the Spontaneous Music Ensemble (and so of improvised music) but the only previous album of the duo alone is Face to Face (Emanem, 1974). From 1968 to 1976 the two often were the SME. But when recording opportunities came up, Stevens usually opted for an expanded version rather than this minimal version. However, from 1970 onwards, Watts recorded SME performances onto cassette tapes. This release comes from his tape archive, and dates from 1972 and 1973—a treasure trove of previously unreleased music. (Incidentally, the tapes have cleaned up miraculously well and have a very acceptable sound, displaying none of the hiss that cassettes are prone to.)

This album is well named; it literally finds the SME stripped down to the bare bones. It is impossible to find a redundant phrase here, so concentrated and focused is the music. Stevens and Watts know each other so well that they play as if the music comes from a single mind. High as their strike rate was, subtle editing enhances it further. Stevens was notoriously mercurial as a performer; he would experiment in front of an audience, often spectacularly but sometimes unsuccessfully. Judicious editing ensures that we hear his successes.

It is impossible to do justice to all of this album's high spots, so numerous are they. The thirty minutes piece "For Phil" was recorded on the day that drummer Phil Seaman—a huge influence on Stevens—died. The grief and emotion felt by the duo is tangible; the piece can make raw, painful listening, but the music itself is stunning. It moves from a mournful opening lament played by Watts, with understated drumming from Stevens, gathering energy as the drummer punctuates the music with vocal ululations, before reaching a roaring climax as cornet replaces drums and a horn duet ensues, at times reminiscent of "The Last Post." Finally, with their energy and grief temporarily spent, there is a reflective section. Magnificent.

Totally different, but highly illuminating about the duo's working methods, are the seven different takes of "Open Flower," based on Stevens' initial starting point. They illustrate the different directions that each start can lead to—and very different they are, from the prolonged squalling horn piece that is "Open Flower 3" to the brief (but highly concentrated) "Open Flower 5." Together, they demonstrate the strength and pleasure of free improvisation—never predictable, never rehearsed, never safe.

The closing track, "Lowering the Case" (surely named to emphasize its link to ultra quiet "lowercase" music) anticipates developments that are still being worked through, featuring music of extremely low volume. A central section, featuring a minimal exchange between cornet and soprano saxophone sounds highly contemporary, as indeed does the whole piece. It is extraordinary that it was recorded thirty five years ago, a sign of how influential Stevens was—and remains.