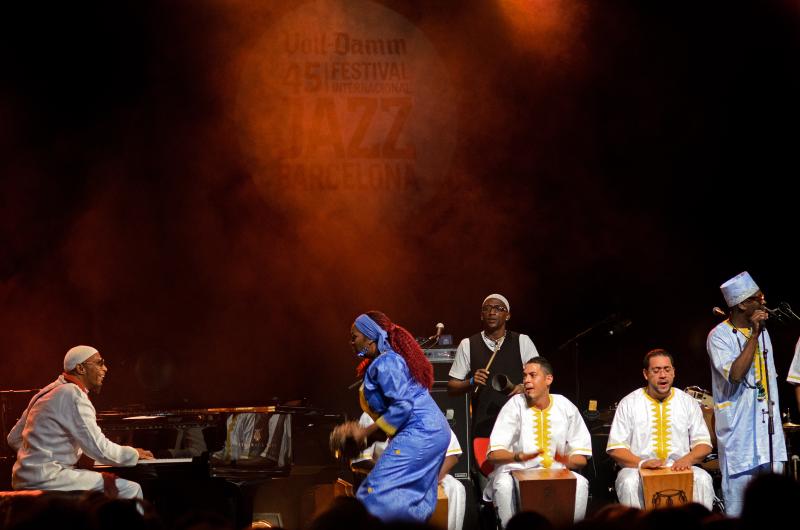 A short quote, repeated to me more than once over the course of a few days in Barcelona, proved to be at the heart and soul of the 45th Barcelona Voll-Damm Internacional Jazz Festival. It goes something like this—"On the day that I die, shed no tears. Play my music, eat chocolate, drink rum and dance." So declared Cuban pianist Bebo Valdes, who died at the age of 94 in March 2013.

The Festival's Artistic Director, Joan Anton Cararach—an old friend of Bebo's—and Valdés' son and fellow pianist, Chucho Valdes brought this heart and soul to life with Rumba Para Bebo. This was a most ambitious production—a dizzying mix of jazz, dance, classical music and all-round good vibes that gave Bebo's friends, family and collaborators the chance to celebrate his life and which sent the sell-out crowd into raptures.

Rumba Para Bebo took place on the Tuesday night of the festival's second week at a new festival venue known as BARTS. True to Bebo's wishes, free chocolates and shots of rum were handed out to audience members as they arrived. Dancing was much in evidence as well—on and off stage. Tears were shed, too. The emotional impact of the night was so great that a few tears were only to be expected, a reflection of the love so many in the theatre had for this star of Cuban music.

Chucho Valdés was at the center of the concert, with his band the Afro-Cuban Messengers, playing solo or joining other musicians. His duo performance of "Bebo's Blues" with bassist Javier Colina was one of the highlights of the concert, but there were many others. Jerry Gonzalez' performance of "Bésame Mucho" on flugelhorn; the singing of Bebo's daughter Mayra Caridad Valdes; the pianists Lázara Cachao, Javier Massó "Caramelo" and, from the classical world, Mauricio Vallina (who performed pieces by Cuban composers Ernesto Lecuona and Ignacio Cervantes), all stood out. Another pianist, Omar Sosa, performed with Malongo, a vocal and percussion group. Clad in white, the troupe's striking visual image matched the intensity of the performance. 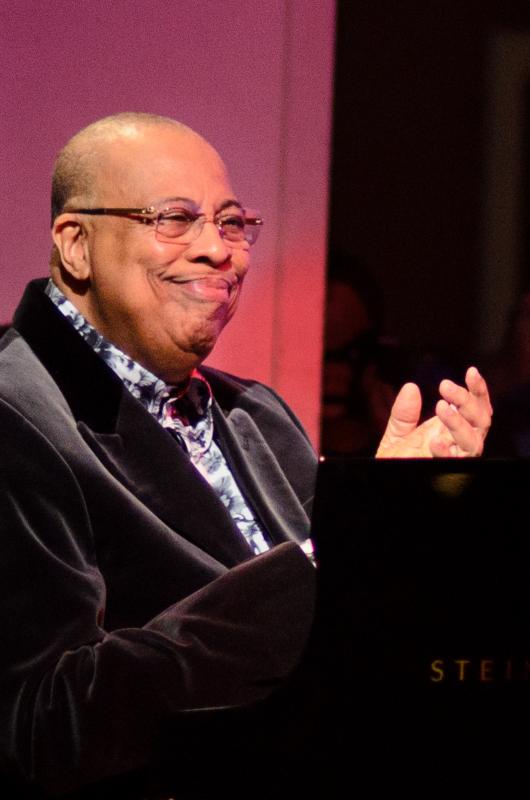 The finale was powerful, a stage full of the musicians and dancers (and a few extra participants who managed to make their way onto the stage as well) clapping, dancing and singing their hearts out. The audience did much the same, creating a wave of energy throughout the hall. This energy was almost palpable: as Cararach revealed a few days later, it was so strong that the venue manager feared for the structural safety of the stage. The song was "Rumba para Bebo," written by Chucho after he dreamed that his father was singing him the song.

Chucho Valdés and the Afro-Cuban Messengers took to the stage for the second time the following night, this time selling out the beautiful Palau De La Música. The Messengers proved to be a tight, strongly rhythmical, unit. The line-up—Valdés on piano, Gastón Joya on bass, Rodney Barreto on drums, Dreiser Durruthy Bombalé on batas and vocals and Yaroldy Abreu on percussion—ensured that the emphasis on rhythm was given primacy, but these virtuoso players also displayed a talent for melody and an ability to produce gentler, more romantic, music. This aspect of the Afro-Cuban Messengers was at its finest in a trio performance by Valdés, Joya and Barreto, when Joya's arco bass playing exceeded Valdés' piano in its emotional impact.

Valdés also took obvious pleasure in referencing Dave Brubeck, inserting lengthy sections of Brubeck's "Blue Rondo A La Turk" and Paul Desmond's "Take 5" into one of his solos. Three encores closed the evening, following a standing ovation from the crowd. The second, a funky jam band number, featured Joya on electric bass guitar. The third featured the dance stylings of vocalist and bata player Bombalé—dancing to the rear of the auditorium, then returning to the stage for a few somersaults, with an impressive level of energy that belied the fact that he'd already been on stage for over two hours.

Away from the major venues and the big name international stars, the Barcelona Jazz Festival has always offered a series of small-scale events that have their own particular charms. These events might showcase local bands, give students a chance to learn from their heroes in masterclasses, or blend wine tasting with the chance to hear musicians talking about musicians. They're always worth seeking out: the best things can come in the smallest packages.

Monvínic, a stylish restaurant on the Carrer de Disputacio, has played host to some intriguing events at previous festivals. The 2013 program featured the venue once again and the Monvínic Experience—a wine tasting plus improvisations combination this year featuring Ravi Coltrane—had already taken place before my visit. On Wednesday evening Monvínic played host to a unique version of the Downbeat Blindfold Test. Presented by Ted Panken, with pianist Omar Sosa as his guest, the test followed the time-honored format: Panken presenting Sosa with a series of nine unidentified tunes which the pianist then commented on. The added attraction, as is always the case with Monvínic, was the chance to taste a range of excellent wines chosen by award-winning Head Sommelier Cèsar Cànovas to match the music being played.

Sosa was a passionate, articulate and knowledgeable guest, giving clear explanations for his opinions and criticising, on occasions, without being destructive. He correctly identified five of the pianists, as well as a couple of the accompanying percussionists. His comments were instructive, both about his own approach to the piano and the styles of the musicians we listened to. 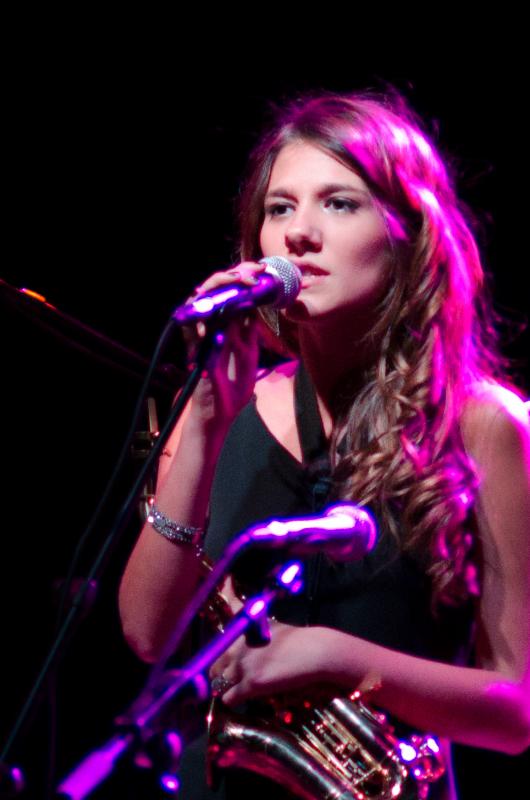 Another favorite performance space, the club known as Luz De Gas, took its place once again as one of the festival's most popular venues. The concerts which took place there during this week ably demonstrated the range of styles and approaches which Catalan musicians are engaging with. First up was a showcase concert for Eva Fernández, a young singer and saxophonist from Barcelona. Fernández is one of the fresh young talents to emerge from the Sant Andreu Jazz Band. The band's director, bassist and saxophonist Joan Chamorro, accompanied Fernández. So, too, did singer and trumpet player Andrea Motis, the band's best known member who already enjoys star status in Catalonia.

This was a concert devoted to classic songs, interpreted with skill and maturity by Fernández who, like Motis, is still in her teens. "Cry Me A River," "These Foolish Things" and other standards flowed freely, the talented band giving Fernández terrific support. A lively version of "Cheek To Cheek" featured Fernández and Motis in a vocal duet while "My Favorite Things" featured Fernández' flowing, positive, soprano sax solo. An encore of "Smile" featured guitarist Josep Travera on ukelele.

Chamorro could be described as a terrific front man, but for the fact that he spent most of the concert at the rear of the group, with his double bass. Wherever he stood on stage he drew the attention, not only with his dynamic bass playing but also with his physical presence. On the slower numbers Chamorro's movements were almost balletic as he responded to the melodies. He also showed himself to be a stylish saxophonist, adding tenor to "Cry Me A River" and "My One And Only Love" and playing the melody of "Donna Lee" on baritone in unison with trumpet and alto.

Duke Ellington isn't the likeliest supporting act, but it was he, accompanied by bassist John Lamb and drummer Sam Woodyard, who opened for pianist Ignasi Terraza and his trio on Saturday night at Luz De Gas. The trio performed a suite of Terraza's original compositions, titled Imaginant Miró in tribute to the famed Catalan artist and jazz lover Joan Miró. Obviously Ellington didn't make the support slot in person. In 1966 the pianist and the artist met in the south of France. Ellington played a couple of numbers, watched over by Miró, and the impromptu performance was captured on film. The film of one of the tunes, a blues which Ellington eventually called "The Shepherd (Who Watches Over His Flock)," served as the introduction to Terraza's own performance. 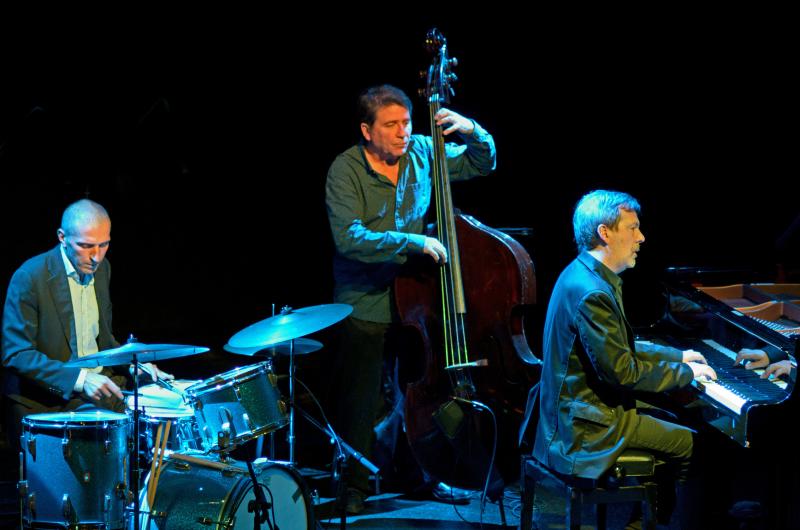 Terraza and drummer Esteve Pi had formed part of Fernández' backing band two nights previously. In contrast with that earlier concert, Imaginant Miró was characterised by a more meditative approach and a calm, relaxed, stage presence. The suite was beautiful—at times haunting, at others graceful and, in its occasional upbeat moments, filled with a joyous positivity. The opening section, a slinky blues-based tune, was reminiscent of the version of Jon Hendricks and Harry "Sweets" Edison's "Centrepiece" recorded by Joni Mitchell—another jazz-loving artist with the initials JM.

If Monvínic represented the upscale jazz experience and Luz de Gas its slightly shabby yet still glamorous side then the Harlem Jazz Bar, tucked away in a side street in Barcelona's Gothic Quarter, provided a more visceral experience. Friday night saw the first in a set of performances from Catalan singers, titled Voices Of Barcelona. The club was crammed full with fans of all ages.

Laia Badrenas and Clau De Funk played a hugely enjoyable set, getting the crowd clapping along almost from the start. This was unpretentious, groove laden jazz, soul and R&B played with crowd-pleasing enthusiasm by a talented young band. Badrenas herself was visually striking and vocally strong, while alto saxophonist Josep Valldeneu proved to be a versatile and emotionally-engaging instrumentalist. Classic songs—including a funky version of "(For God's Sake) Give More Power To The People," a slinky take on Chaka Khan's "Tell Me Something Good" and a high-energy encore of "Blame It On The Boogie" and James Brown's "Sex Machine"—ticked all the right boxes for an audience out for a good time. 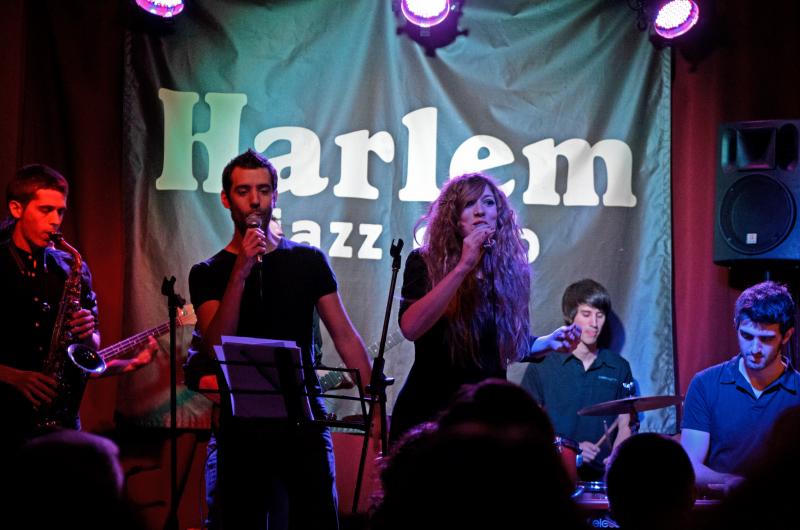 Masterclasses have proven to be a popular part of the Barcelona Jazz Festival in the past and the extended 2013 program featured 18 of them. The classes, free of charge, were held in the Conservatori Del Liceu. Two masterclasses took place during my visit: a class on music journalism given by Ted Panken and Ashley Kahn and a Cuban percussion masterclass led by Yaroldy Abreu from the Afro-Cuban Messengers.

Panken and Kahn spoke, in English, with a small but enthusiastic group of music students on various aspects of music journalism in the contemporary jazz scene. The pair provoked some intelligent questioning and debate on subjects such as the nature of criticism, the importance for both writers and musicians of a knowledge of the music's history, the best sources of information about that history and whether a music journalist needed to be a musician. Both men agreed that it could well help, although Panken acknowledged that he was not a musician and Kahn revealed that he played guitar ..."for an audience of one."