I almost feel that this album is not so much a Barbara Sfraga album as the birth of a new band under her direction. 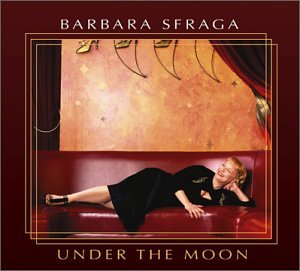 Barbara Sfraga is one of those rare artists who is developing her own voice and style more and more with each recording. Her vocals contain elements of two of my favorite vocalists: Mark Murphy and Kitty Margolis. She is a risk taker that has established her own group sound on this new release. Each member of the ensemble has an individual voice, but together every players contributes to the whole vision that Sfraga has fashioned, or envisioned (perhaps both). One almost gets the impression that this is a group of friends having an interesting and wide ranging conversation on a variety of subjects that we are privileged to be able to sit in to hear.

The set begins with a moody and spacious reading of Hoagy Carmichael’s "Stardust" with a subtle funk feel supporting the entire construction. Drummer Paul Wertico on drums and percussionist Kevin Patrick deserve a great deal of the credit for their ability to burn quietly on this and other tunes. It segues into a 5/4 Latin take on a personal favorite, "I’ve Grown Accustomed To His Face." Sfraga doesn’t force the lyric into the metrical constraints; quite to the contrary, its delivery sounds entirely natural in an almost conversational feel at times. Space is such a difficult concept to teach young musicians, and it is very rarely mastered by the mature variety.

However, this version of "Mood Indigo" is a textbook example of how it should be done. Haunting voice from Barbara Sfraga, aching guitar chords from John McLean, and a subtle but strong foundation provided by Christopher Dean Sullivan all combine to create a work of great beauty. Sfraga is a master of taking songs and twisting them into her own style. For examples, check out her up-tempo samba reworking of "You’ve Changed," her 6/8 arrangement of "It Might As Well Be Spring," an up-tempo jazz waltz version of Duke Ellington’s "Sophisticated Lady," and a funk laced "Prelude To A Kiss."

"Changed" has a spirited guitar solo from John McLean; "Spring" contains an interesting modulation into the final "A" section that is part of the new form of the song as well as an extension of the lyric on the tag; “Lady” has a burning bass solo by Christopher Dean Sullivan; and "Prelude" is almost a voice/drums/percussion extravaganza, with the exception of a section that features a bass solo overflowing with funk. The Angela Bofill song "Under The Moon And Over The Sky" is redone in a world music style that seems galaxies away from its urban contemporary roots, yet entirely natural. It also showcases Sfraga's wide vocal range.

The nicest surprises are the final two numbers on the recording. "Never Walk Away" is an original song that has influences from all over the musical spectrum, including Brazilian, world, hip-hop, and blues, and the lyrics are especially insightful to those of us experienced with the condition known as marriage. Bob Dylan is not the first songwriter I would think of for a vocal bass pairing, yet this version of "Every Grain Of Sand" fits Sfraga and her bassist like an Isotoner glove. The lyric takes on new meaning and significance with its beautiful phrasing, and the melody stands out against the sparseness of the accompaniment.

I almost feel that this album is not so much a Barbara Sfraga album as the birth of a new band under her direction. The colors, the landscapes, and the hues she paints with on this album defy words. Descriptions are simply inadequate. It truly is an exciting listening experience which should appeal to those who have grown tired of hearing the same forty jazz songs done in the same way. Perhaps if more jazz musicians and vocalists approached material in so fresh, musical, and innovative a manner we would not be speaking about jazz as a museum piece to be relegated to the dustbin of time. Bravo, Barbara!

Visit Barbara Sfraga on the web .