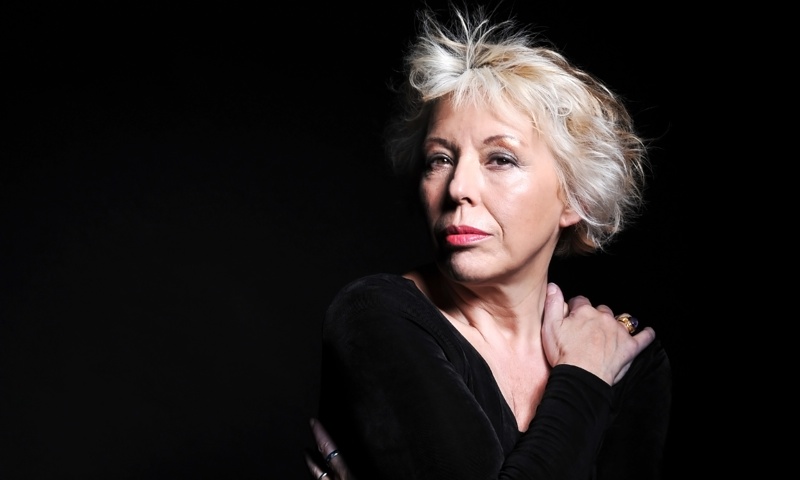 By SAMMY STEIN
April 15, 2014
Sign in to view read count
Barb Jungr brings her infectious enthusiasm to even the most mundane of things. A stroll in the park is turned into a gleeful discovery as she finds a stand of daffodils; a walk home is turned into delight as Jungr snaps a picture of London by night from a bridge. She has that knack of spotting something you never realized was there and making you look at ordinary things differently. She plays with phrases and words—like 'polyglot,' or 'loop of life' and 'pants' (to mean something is rubbish, in this case the M6 motorway). Jungr loves words—she loves music, people, things—life in fact. Her new album Hard Rain is her personal take on songs of Bob Dylan and Leonard Cohen and proves a worthwhile listen. There is, however, so much more to this lady than her mistral voice—although it is a big part of what makes her 'her.'

Born in Rochdale, UK, Jungr grew up in the town of Stockport. She is of Czech-German parentage and says of her childhood, " We were a refugee family in Rochdale, among Irish Catholics. We—people from The Ukraine, Poland, Germany and Austrian Jews, and more, were absorbed and made welcome. There was always music. There was radio and an old record player and my parents took me even as a tiny child to the cinema, theatre, opera and ballet. Europeans have that view of art and culture as essential. The church had pantomimes and performances and everyone took part—this was in the mid '50's when TV was rare and people made their own music and entertainment—I was really, really lucky to grow up in this community. So I grew up singing. As a tiny little girl in a terraced house in Rochdale I turned my front step into a stage and performed shows with my poor beleaguered dolls!"

Of when she realized she could sing, Jungr says, "I sang almost from day one. My Dad said you couldn't shut me up. I could remember tunes and melodies from the radio on one or two hearings and just launch forth. I learned the violin from age 7 through 15 and did all the exams. I appeared as a soloist at music festivals and played in the school orchestra. Somewhere around my mid teenage years, I formed a folk group with some friends from school and we trailed around Manchester singing our woebegone ballads. We called ourselves Arwen—you can't make this stuff up! We were drippy and dreamy. I loved it. I dreamt of running away and joining the cast of 'Hair' I was that daft! I sang and played right through my youth and when I went to university at Leeds I played in jazz bands and folk groups—I sang anywhere and everywhere I could."

Jungr completed her botany degree at Leeds before moving to London, where she became involved in punk, then alternative cabaret. She earned a Masters degree in music—ethnomusicology, she informed me to be precise, at Goldsmiths College later on. She wrote about world music for the magazine The Singer, before that publication sadly folded.

Jungr performs with many other musicians and singers. She says, "I've been a soloist pretty much all my life but I have had a long association with my great friend Julian Clary, the brilliant comedian, and wrote with and for him—songs that is. I have appeared with him on tour and on several TV series. I've performed with singers Ian Shaw, Mari Wilson, Claire Martin, Christine Collister and Michael Parker to name a few. The composer Mark Anthony Turnage wrote a piece for and with me and that opened the refurbished South Bank at the Queen Elizabeth Hall at their festival of re-opening. But for most of my life I was in bands or groups or myself that I'd formed—The Three Courgettes, the harmony group I formed in the late '80's had a top 100 hit with our theme song. Jungr and Parker—we travelled the world singing and playing."

Jung's musical influences are varied. She told me that recently she was chatting with her friend, the composer and pianist Simon Wallace, about just that thing. She listens to "tons of old soul, old gospel— the small harmony groups like the Fairfield Four, Blind Boys of Alabama, old blues. All of that is deep, deep for me. I love British traditional music and a lot of contemporary folk. I never tire of Philadelphia Sound, Motown and the American soul-blues record label Stax. I love performers such as soprano Maria Callas, jazz singer Sarah Vaughan and singer and pianist Dinah Washington— the greats."

She listens to a huge range of music, from contemporary to jazz and right across genres. "I listen to everything." She says, "Recently someone sent me some Mongolian vocal nomadic song, so I got tied up in that for an hour or so. I listen to an increasing amount of classical music. I'm suddenly interested in Wagner and quite a lot of weird contemporary stuff. Instrumental jazz is another current big obsession. John Coltrane of course and Miles Davis—there's not enough time in the day! Quincy Jones' early jazz recordings also. I'm listening to singer Linda Thompson and "The Full English" and a lot of older traditional songs. I get involved with things and go on a tangent and people send me things. It's great."

Jungr is involved with many things so I asked if she could describe her emotions on stage—whether she could put everything else out of mind and describe how she feels. She replied, "No I can't describe the emotions. I can say that I 'clear out.' I try to just be absolutely in the flow. Listen and sing and nothing else. I've actively worked over the years to remove anything from my head that impedes that. I want to be a sort of vessel for the song and singing and nothing else. No thoughts; that stuff is for rehearsals. All the head stuff goes on beforehand and after. In the performing, there is just the music and nothing else."

Jungr is aware of her audiences' reaction. "Well, audiences get emotional—that's what they're supposed to feel—it's music—it's emotive and if I do my job right, they feel what the song wants them to feel. For me the song is sacrosanct- it's the message, the medium, the vehicle and the elevation. If I get it right the audience let me know!"

I asked Jungr how she would sum up her philosophy on life and music. She said, "That is an interesting question. Do I have philosophies? Well, lots, I think. Listen, listen, listen. Be good, be better, work harder, use every moment, if you can't be kind—say nothing, think more, talk less, all that. Work harder. I waste time still and as time flies by these days I'm conscious I have less and less to throw about, I got to use it all."

I asked Jungr where the most appreciative audiences were. She replied, "Well, in the UK, USA and Australia, all of which I play fairly regularly. London is my home—I was at the 606 Club recently and the Purcell (concert venue) last month—our audiences are fearless. I played Masters Of War by Bob Dylan ( a song from her new album) in the 606 and you could have heard a pin drop—fabulous. I love playing in New York because they 'get it' and Australia is fab because people are so happy you actually got there—it is miles away. People are amazing."

Along those lines, I asked Jungr how aware she was of musicians on stage with her and if she could describe the connections the music makes between band members and audiences.

"I'm completely aware of the musicians I work with. I hear every note, and they do too—we are in that boat together, it's a one way row and we're all on the oars. I love the musicians I work with. I hear what they're playing and my whole life is in vibration. What a brilliant thing to do with your life, be IN music— what's better? And I work with such great people. I'm just blown away by how fabulous they are. A solo will come and I'll go—'wow'—what an amazing place to take us!

Jungr has lots of projects and ideas for the future. " I have loads going on" she says, " I'm back to the States in the summer—to Connecticut and in the autumn to New York and touring in the UK through the year. I'm involved in a massive project in Corby, UK with local musicians and a choir led by the superb Gareth Fuller, so that takes up a lot of time. And I'm taking my new album Hard Rain every place someone wants it. I'm loving singing these songs."

Away from music Jungr has other interests including yoga, walking, films and theatre. She applies the same dynamic energy to these as she does her music. "I have friends I go coastal path walking with and I love Scotland, wildlife, emptiness and travel. I'm a terrible film buff and I write for children's theatre so I see a lot of theatre. I write musical theatre (she describes the writing as 'total joy') so I see a lot of musicals."

In terms of how she would categorize her singing, Jungr says, "Well, I'd say I'm a jazz singer because it's the closest definition of what I do—and I sing with jazz musicians, but it's also cabaret because there's a theme and a movement inside it."

To sum up Jungr in a few words, I would have to include effervescent and enthusiastic. Her answers to questions are interspersed with so many positive terms like 'fab,' 'splendid' and 'wonderful.' Things are 'great,' 'brilliant' and someone else's solo makes her go 'wow.' Jungr seems to have no aloofness or sense of competition. She seems to simply be enjoying what she is doing, and perhaps pinching herself every so often, as she finds herself in such an amazing time. She shares a lot with others, including her voice, but also just things she spots. She may send a picture of bright yellow flowers in the park to cheer people up, or ideas and thoughts about music, songs and life itself. Jungr is energetic and easy to talk to. Her enthusiasm for anything that moves, waves or makes a sound is totally engaging. Of those beleaguered dolls to whom that small girl performed on the doorstep a few years back? They're probably smiling with pride.