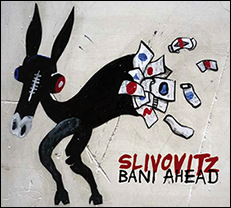 Slivovitz—also the generic name for a type of plum brandy popular throughout the Mediterranean—is a fascinating jazz-rock band that's been around for a decade or so. Bani Ahead, its second recording for the MoonJune label and third overall, is a charming blend of jazz and progressive rock with pronounced Balkan and circum-Mediterranean folk influences. Part of Slivovitz's appeal also has to do with its unusual and highly flexible instrumentation. With a front line composed of saxophone, trumpet, violin, guitar, and harmonica, Slivovitz is a band that can roar, whisper, laugh, and cry—often in the same tune.

Harmonicist Derek DiPerri gives the ensemble a truly distinctive sound. Unlike a lot of the new generation of improvising harmonica players, he's as capable of playing dirty, low-down blues harp as he is clean, boppish, high-precision lines. Like Gregoire Maret, his playing projects great warmth and a pathos that's in short supply in a lot of cutting-edge music.

Each of Bani Ahead's eight original tunes are rather complex, multi-sectioned affairs with several melodies, lots of odd time signatures, and a variety of contrasting improvisational opportunities. Though Slivovitz's approach favors the compositional end of things, there's also some fine soloing to be heard. Though it starts with some shred-sounding guitar, "Egiziaca" is a decidedly jazzy tune with an almost big band-sounding line that is quickly subverted by a Balkan-tinged counter melody, which ultimately dissolves into a slower, spacey segment featuring electric trumpeter Ciro Ricciardi.

Violinist Riccardo Villari gets a lengthy solo on the raucous "Cleopatra Through," the song's loping 5/4 rhythm emphasizing the band's prog-rock tendencies. The darkly lyrical "Vascello" sounds a bit like the Pat Metheny Group covering an old Mahavishnu Orchestra tune, though the main solo voice here is tenor saxophonist Pietro Santangelo. "02-09" is an episodic, metal-inflected piece with a few really abrupt changes, some inspired collective horn soloing, and lots of impressive guitar work from Marcello Giannini, while the charming, Klezmer-influenced title tune sports a hard-rocking section in the middle, similar to recent Tzadik label efforts led Pitom and Eyal Maoz.

The band shows a mellower, more lyrical side on "Far" and "Opus Focus"—dark, introspective pieces with an almost ECM-like ambiance—while the closing "Pocho" is simply beautiful, with several strong, interlocking melodies that project the sort of yearning or regret heard in the best Brazilian music.

Fans of European progressive rock and fusion bands such as Area, Arti & Mestieri, Gong, and National Health will find a lot to like on Bani Ahead. That said, this is a band whose appeal transcends any perceived ability to recreate past musical styles; Slivovitz is not a nostalgia act by any stretch of the imagination. Instead, utterly contemporary and with its own voice, Slivovitz is part of the revitalization of jazz-rock fusion as a contemporary, alternative musical style.