The fourth day of the Bangkok Jazz Festival featured only one act on the main stage, so there was a chance to catch some of the music on the second stage. Apart from the university student bands there were several performances from the music instructors. Sporting slightly more grey hair and slightly more rotund figures than their students, their music was correspondingly more steeped in the bebop tradition and the playing more fluent. Particularly noteworthy was the performance of the Changton Kunjara Quartet, which played a lively, boppish set.

One or two foreign bands were invited to participate on the second stage, and the third evening saw a notable performance from Jazz for Kicks, led by Philippine singer Sandra Viray, whose energetic set of mostly standards won over the small but enthusiastic crowd. The distinctive vocalist Viray and her band injected real swing into old chestnuts like "Get your Kicks on Route Sixty Six" and a surprisingly fast rendition of "Honeysuckle Rose." The one original tune, a ballad titled "I Found Love," was recently recorded by Viray with Flora Purim and Airto Moreira. The highlight of the hour-long set, however, was an upbeat interpretation of the Nina Simone classic "You Know How I Feel."

Before the main program began every evening, the crowd rose to the national anthem, which is surely one of the most moving anthems in the world. It is customary in Thailand for people to halt what they are doing when the anthem is played morning and afternoon. It is difficult for outsiders to appreciate just how revered and loved King Bhumibol is.

Jazz Kamikaze, the only band appearing on the main stage on the fourth evening. is a regular visitor to Bangkok. However, like the lizard which sheds its tail, the band has cast off its former skin and totally reinvented itself to the point that the music was largely unrecognizable from their last visits to the kingdom.

Formerly instrumental, the material performed exclusively from their just-released CD, the aptly named Supersonic Revolution(Hitman Jazz, 2010), was entirely vocal, with Morten Schantz spending a good deal of the show standing front-stage at the microphone. Gone is the grand piano and in its place a vocorder. There is now a distinctly pop-art aesthetic about the new music, anthemic, lyrical, and very, very loud. With three keyboards on stage the set-up had the appearance of a Kraftwork show, though there the comparison ends.

Saxophonist Marius Neset peppered the set with solos lively by even his standards, but guitarist Daniel Heloy Davidsen played much more of a supporting role, laying down heavy-metal power chords and riffing with relish, while limiting his solos to short, fiery bursts.

Drummer Anton Eger pounded his kit with contagious enthusiasm, and bassist Kristor Brodgaard seemed to be attempting to murder his bass, as he laid it sideways on the stage and stood over it, not so much plucking notes from the strings as wrestling music from it menacingly. Jazz Kamikaze gives everything in concert, and that much has not changed. 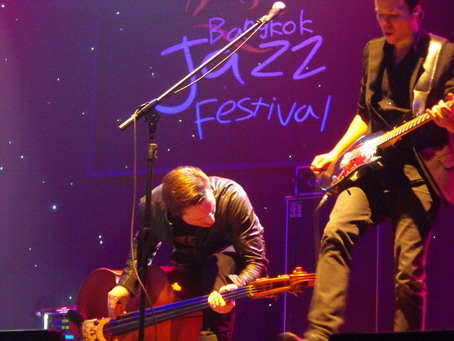 In its present incarnation Jazz Kamikaze bears more comparison to Radiohead than to any particular genre of jazz though, conversing with Schantz and Brodgaard after the show, they cited Charles Mingus and Miles Davis as inspiring models of the need to reinvent themselves. Schantz explained how Jazz Kamikaze's transformation has happened gradually over the last three years and how the music has been experimented with and refined on the stage.

There is a stadium rock grandeur to a song like "Music is My Heroin," but the band is also capable of great subtlety, as on one of the King's compositions, an instrumental version of "Oh I Say." It is unlikely that one of His Majesty's songs, played by nearly all performers who come to Thailand, has been so thoroughly deconstructed. Schantz provided shimmering synth accompanied by Neset's beautifully lyrical soprano saxophone. It was a stunning interpretation, its brevity catching the audience unawares.

The set closed with the powerful "Acropolis," with Neset attacking his saxophone like Albert Ayler, before Schantz' vocal and keyboards steered the band through quieter, more reflective terrain. The song, transformed into a beautiful anthem, built inevitably to a rousing conclusion with the Jazz Kamikaze crew flying as one and Schantz soaring vocals filling the arena.

The penultimate day of the festival began with the stirring big-band of Mahidol University on the second stage. Yet again, during their set and the subsequent acts the crowd had to endure the simultaneous performance of a Thai boy-band on a stage in the same plaza. Hundreds of teenage girls greeted every gesture of the boys with screams, all the while encouraged by an emcee who kept up an imposing rant—a battle of the bands of sorts.

It was to their credit that the twenty-two musicians of the Mahidol big-band played as well as they did. This formation has been together for less than a year but already performs with a professional aplomb. The highlight of its set was a superb rendition of Pat Metheny and Lyle Mayes' "Minueno," played with requisite flair and drama. Big-band jazz is perhaps the one field Metheny hasn't ventured into, but certainly this performance by the Mahidol Big Band demonstrated the exciting potential of Metheny and Mayes' music in such a setting.

The attendance over the course of the festival was very poor, and it was a rather depressing sight to see only fifty or so people in the marquee for Japanese saxophonist Mariko Endo. Leading a tight, grooving band, Endo put in an energetic performance of jazz funk which takes Grover Washington as a reference. Her music may have been a bit on the smooth side for any jazz purists in the audience, but Mariko is a rhythmically strong player with a lovely sense of phrasing and her set went down very well with the audience.

The crowd gathering outside the marquee for the closing concert of the evening signaled that something special was afoot. It wasn't. A duo played a set of saccharine Thai pop which would have sent jazz fans running for the exit, had there been any in attendance in the first place. More illustrious jazz festivals like Montreux and New Orleans have long served up pop and rock acts, but in the case of Bangkok it seems like an economic necessity to get some bums on seats, because jazz sadly, clearly isn't doing it. In this instance, however, the concession to a more accessible pop sound fared no better.

The final day was firmly rooted in the smoother side of jazz, with main stage performances by Thai veteran Jirapan and his band Blue Saphire and old Asia hands Bob James, Nathan East, Lewis Pragasam and Jack Lee, aka Asian Fourplay.

Guitarist Jirapan played a selection of highly melodic tunes with dashes of Latin rhythms, to perhaps the smallest crowd of the six-day festival. Cover versions of Michael Jackson, Antonio Carlos Jobim and the Beatles featured the fluid guitar lines of Jirapan, but the show never really got out of first gear until the band played the Beatles' "Come Together: and Jeff Beck's "Freeway Jam," which injected a welcome bit of pace into the performance. Jirapan allowed himself to stretch out on his guitar on Beck's classic, something which was lacking during the rest of the show.

The most welcome surprise of the festival was Pe'z, a quintet of young musicians from Tokyo who kicked up a storm on the second stage. Saxophonist Kadota Kausuke and trumpeter Ohyama Wataru led from the front, harmonizing the main melodies and letting rip with some great solos.

The impressive rhythm section of Nirehara Masahiro on double bass, Kou on drums and Hiizumi Masayuki on keyboards played in double time for much of the set. Masayuki was a show in himself, hopping up and down behind his keys, pirouetting and jumping about like a break-dancer or a basketball star executing all manner of tricky moves. His entertaining antics did not hide the fact that he is also a very talented musician. 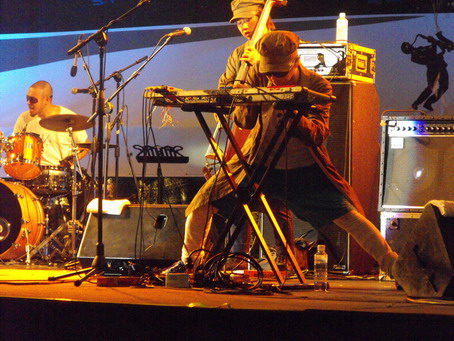 A good dose of ska colored the music and the energy levels were high for the near-ninety minutes the set lasted. Dressed in matching grey overcoats and peaked caps, the band had the look of Chinese communists from a bygone era, or factory janitors, but whatever the look, Pe'z's hot music swung hard and won great approval from the assembled crowd.

The curtain came down on the Bangkok Jazz Festival with the performance of Asian Fourplay. Bob James' lyrical compositions were buoyed by the funky bass of long-time collaborator Nathan East, who also provided wordless vocalizing.

The other members of the band are both seasoned pros; Jack Lee and drummer Lewis Pragasam are first call session musicians for anyone playing in the Asia Pacific region, and the interplay was tight.

As has come to be expected with Bob James, the music was for the most part smooth with just occasional forays into more challenging jazz territory. The East composition, "Journey," was boy-band, crooner-like and quite forgettable to boot. On the other hand, East's composition "101 Eastbound" was lively and featured an extended solo from James.

Thai singer Lupa joined the band for a couple of songs, "I Feel like Making Love to You" and a Thai pop song which slowed things down some more. The set was rounded off with a faster, Latin-flavored number, and some Bob James-style funk made up the encore.

Six days was too long for a festival which offered two acts at a little over two hours of music on the main stage each evening, apart from two evenings when only one band performed. Perhaps condensing the festival into three days and offering four bands per evening might result in healthier crowds; also, a little more advertising around town might have helped in that regard. Finally, the location of the festival is questionable, at least if competing entertainment performing at high volume is going to adversely affect the music on main stage. Whether or not the Bangkok Jazz Festival survives for another edition remains to be seen, but there is clearly still some fine-tuning to be done.