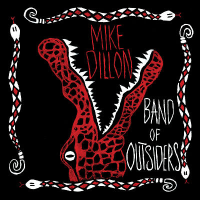 There are so many different ways to rebel in life, and Mike Dillon has done them all. Or so it seems, if the music on Band of Outsiders is any indication. Dillon is that rare musician who can take tropes from any number of disparate musical worlds-metal and Brazilian samba school for example-mash them together and create something truly fresh and new. He's a first rate drummer and an equally fine mallet percussionist. Here, he's mostly rocking the electric vibes and singing, though he also plays tablas, congas, and all manner of Brazilian percussion. He's joined by drummer Adam Gertner, trombonist Carly Moore (both of the indie funk-rock band Yojimbo) and bassist Patrick Mcdevitt . Moore, a startlingly talented and versatile performer, contributes a number of fine but all-too brief solos on conventional and plugged-in fuzz-wah trombone. She also chips in sexy, kittenish backing vocals that contrast elegantly with the leader's gravelly rasp. Some of Dillon's long-time partners-in-crime such as Matt Chamberlain, Skerik, and Marco Benevento stop in for a few tunes, but Band of Outsiders is clearly a "band" album.

Anyone expecting Garage a Trois or The Dead Kenny Gs redux may be a mite perplexed by Band of Outsiders, and not just for its emphasis on Dillon's distinctive vocals. The music here is clearly from the rock end of the spectrum. Sure, it's twisted, polluted and convoluted rock mixed with metal, ska, funk, and jazz, but it's definitely a rock record. The tunes are short, energetic and played with an explosive sort of virtuosity that begs for multiple listens. Though clearly accomplished as jazz musicians, Dillon and his band seem to be energized, even liberated, by the shift in focus. Besides, the music on Band of Outsiders is no less sophisticated than most cutting-edge jazz. The band does a lot more than get through this stuff, they inhabit Dillon's music and make it sound like an 8-legged crazy party.

Band of Outsiders starts off with a bang and never lets up. The frenetic "Head" introduces us to Dillon's unusual vocal style. Here, he sings almost conventionally, relying more on a conspirational, Zappa-esque tone than vocal chops. Elsewhere, Dillon uses his voice to delve into different personae: bellowing a stream of consciousness a la Captain Beefheart, rapping like an impromptu street corner raconteur, or crooning like a cartoon version of Tom Waits. On "Celebrate the Hate" and "Homeland Insecurity," Dillon sounds like an Occupy Movement leader trying to stir the crowd up at a political rally. The lyrics are all over the place, encompassing strange tales and inside jokes from the band's touring experiences, radical political polemic and philosophical musings. It's all surreal, phantasmagoric and intelligent, delivered with tongue firmly in cheek.

Dillon's wordplay is as nimble as his music. "Carly Hates The Dubstep" slips from space-disco to free improv to hardcore and back in an instant. The first two tracks, "Head" and "Hand of God" are equally bizarre and inventive; squeezing all sorts of musical styles into a very small space. "Homeland Insecurity" is a raging, metallic roar topped by Dillon's socially conscious caterwaul. In its final moments, "All Walks of Life" abruptly veers from its gently life-affirming lyrics and mellow hip-hop groove to screaming hate speech and skater punk thrash. Dillon raps eloquently on the streetwise "Baby Flint Talk" and "Great Lakes Tuna," both of which also feature Moore's blustery trombone.

A couple of instrumentals give some respite from the frenzy. "Missing," with Chamberlain on drums, touches on the hybrid jazz-rock- funk fusion that typifies Dillon's work with Critters Buggin' and Garage á Trois. Accordionist Laura Scarborough makes the most of her guest shot on "So Long Pal," an Afro-Brazilian romp fuelled by Gertner's snappy snare and Dillon's groaning cuica.

Equal parts chaos and strict order, with lyrics that jump from frightening to playful, Band of Outsiders is a study in extreme musical and social contrasts. And yet, you could dance to all of it, from beginning to end. As accomplished as Band of Outsiders is, I am left with the feeling that Dillon's best work is still ahead of him.