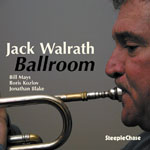 Jack Walrath not only displays tremendous trumpet playing, a rich and varied approach to composition and wonderful band, he also puts something into this fantastic CD that's missing from too much new jazz: a sense of fun and humor. That's not to say that it isn't sensitive and touching at times—"An Hour Blessed" is arguably as gorgeous as anything ever recorded.

However, what is a listener to make of a version of Elvis Presley's "Heartbreak Hotel"? Just the inclusion of a tune from the king of early rock 'n' roll can make one chuckle, but since the tune is a blues, Walrath channels Louis Armstrong, Bubber Miley, Hot Lips Page and Freddie Hubbard as he lays down some serious playing, complete with plunger mute effects. At the end of his solo, the band moves into a twisted stop-time section (something akin to what Walrath's former boss Charles Mingus would do in some of his pieces, harkening back to an older technique of jazz), a drum solo (Johnathan Blake) provides a bridge to another twisted stop-time section that is a background for Boris Kozlov's wonderful arco bass solo. Pianist Bill Mays, who is magnificent throughout, plays a lead that also has one foot in the older jazz vocabulary, but mostly brings a modern harmonic sound and virtuosity that, again, playfully cuts an ironic path across The King's hit.

On the original "He Was Such A Nice Quiet Boy!," Walrath and band even move into free jazz territory, reminding us again recalling that the older jazzmen always said that this music is about telling a story. What then could be the story behind the leader's original "Death is Just Around the Corner Cha Cha Cha"? The happy-sounding tune features great improvised solos from all members of the quartet and is certainly not a funeral dirge. "Impure Inspiration" is a Walrath blues in F where, in the middle of an intense, astounding solo, he calmly quotes John Lewis' "Afternoon in Paris," Mays does some unaccompanied stride and Blake's solo should make him a drum god. When the band plays Johnny Nash's reggae-pop hit "I Can See Clearly Now" the band plays dark, tense minor chords where the lyrics would be "sun shiny day." Well, if you can laugh at death you can cry on a sunny day. Musical food for thought with amazing jazz playing, this recording can't be praised highly enough.

Hold My Bag, Please; Bumpy; (It's Not that Easy) Bein' Green; Nowhere Man; Death Is Just Around the Corner Cha Cha Cha; Heartbreak Hotel; He Was Such a Nice Quiet Boy!; An Hour Blessed; It Don't Mean a Thing If It Ain't Got That Swing; I Can See Clearly Now; Impure Inspiration.