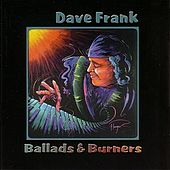 The liner notes to Ballads and Burners states, "There are no pitch/speed alterations or edits on any of the tracks..."—because the pure physical speed of some of the playing is not to be believed.

Chops does not music make, however. Fortunately, pianist Dave Frank is as much a musician as he is a technician. To some extent, technique can be learned, assuming the player's reflexes are fast enough, and he or she can learn to relax. Musicianship is more of a gift and while it cannot be created, it can be developed and guided while it blossoms.

Frank was an Associate Professor of Piano at Boston's Berklee College of Music from 1987-2004 and has since moved to New York City to direct the Dave Frank School of Jazz. As a teacher, he must know that stressing technique produces empty musicians; there is always someone who can play faster.

As the title implies, the album is split between the hyper burners, generally with a very impressive left hand, over which flies an even more impressive right hand, and impressionistic pieces that use Debussy/Bill Evans harmonies.

The ballads are actually more interesting, since the ear is hearing music instead of just saying "wow" over and over. These "pastel" pieces also do not bring out the very hard piano that dominates the "burning" pieces.

Frank is obviously a very talented player. What would be most interesting would be an album of standards given a non-burning treatment. The bar against which such an album would compared might be Eyran Katsenelenbogen's Solotude (Eyran Records, 2006), which combined the highest degrees of both pianism and musicianship.

Spirit of the Burn; Rousseau's World; The Mechanization of America; Information Highway; Salvador Dali In a State of Grace; Jackson Pollack At Work; Shades of Renoir; Afternoon in Nahant; Like People in Heat; Portrait of Manet; Allied Forces, It's Alright With Me.