By GLENN ASTARITA
June 5, 2002
Sign in to view read count 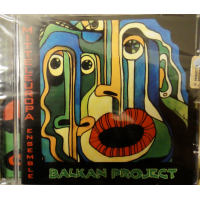 This Milan, Italy based ensemble have been around since 1988. Here, they fuse Balkan stylizations with Klezmer and slight traces of baroque. Yet, the musicians' hearts and motivations lie within modern jazz frameworks. On this fine release, the sextet receives strong support from the guest musicians who comprise the "Rhapsodua Trio. As they render an artful program consisting of hip arrangements, sprawling rhythms, avant musings and more.

Vocalist Sabrina Sparti's wordless vocalise adds quite a bit of luster to this project on pieces such as "Ashkenazim Time - where the band pursues stately choruses and military march progressions. They can swing hard or segue into a Slavic wedding ceremony. The group also propagates a West Coast (United States) kind of vibe amid breezy horns and Ms. Sparti's airy scat singing on "Beograd. It's all about style, character and finesse. More importantly, the ensemble proclaims a wealth of sprightly themes throughout this generally melodious set. All concerned parties turn in thoughtful and at times, invigorating solo spots. However, the musicians' teamwork and irrefutable sense of focus and determination provides the Midas touch! Recommended.