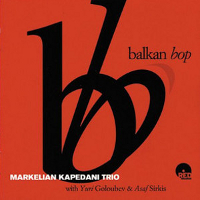 Were we able to quantitate talent density as a function of label catalog size, Sergio Veschi's Red Records would doubtless be close to the top. His generosity to Italian and foreign musicians alike has resulted in a great jazz label. Albanian activist/pianist/composer Markelian Kapedani adds to this fine catalog with Balkan Bop, a standard piano trio performance of ten original compositions, marking his second recording for the label, after 2008's solo Balkan Piano.

Choosing a single track from this disc is a chore; the entire collection is uniformly fine. The title piece, however, illustrates amply the breadth of Kapedani considerable musical vision. The pianist's composing bears the hallmarks of careful study and consideration. Kapedani avoids the diaphanous and ethereal tone of other Eastern European trios in favor of a more volcanic and orchestral approach. In short, Kapedani's compositions have a beginning, a middle and a coda, all well constructed and precisely performed.

"Balkan Bop" illustrates how an assertive drummer can make a trio sound like a larger ensemble. Drummer Asaf Sirkis opens with a funk back-beat right out of the Clyde Stubblefield book, before getting down to business with more straight-ahead percussion. His sound is big and outspoken and needs to be, in order to equal that of the leader. Kapedani is a chain reaction of musical ideas, each building on the next. His performance is percussive without being aimless, playing hard, without losing momentum at tempo. The song is traditionally structured and so polished that it is blinding; uneful to the max and ending on an explosive Balkan fanfare. Bassist Yuri Goloubev proves a capable and equally powerful timekeeper and soloist. All of Balkan Bop is superb.