By HRAYR ATTARIAN
February 10, 2012
Sign in to view read count 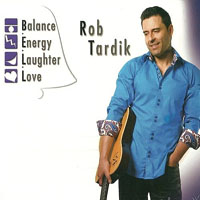 Mississauga native Rob Tardik was named 2010 Canadian Smooth Jazz Guitarist, among other accolades that he has won for his musicianship; it is easy to understand why, listening to B.E.L.L (Balance, Energy, Laughter, Love) . Although, technically speaking, it falls in the smooth jazz category, it is far from ambient, background music. Instead it is highly melodic and rewards a close listen.

As with his previous two releases, on this, his third as a leader Tardik spans different styles including Latin and flamenco, pop, R&B and blues. Here, however, there is thematic structure to the different genres. Each set of three tunes falls under the setting of one of the four elements of the title.

"Enegy" includes the hit radio single "Shakin' the House" with its repeating danceable vamps, the bossa-flavored "When It Comes To Lovin' You"—that again features Mulder—and the danceable "Frolic," with its sparring match between Tardik and keyboardist Davor Jordanovski.

The final segment, "Love," starts with the nocturnal ambience of "Blue Midnight," as Don Breithaupt's bluesy piano and Tardik's virtuoso guitar echo each other over Gabriel Mark Hasselbach atmospheric muted trumpet. Hasselbach's flugelhorn contributes to the soundtrack mood of the electric "Waiting for Love" that is followed by the flamenco-like final track, "Corazon Contento" (Happy Heart)," a three-way musical conversation with Tardik, accordionist Jordanovski and percussionist Gino Mirizio.

Although short on improvisation, this highly polished album is a testament to Tardik's immense talent as a composer and instrumentalist, and these dozen pieces, with their rhythmic hooks and catchy melodies, are never monotonous and always enjoyable even after several spins.