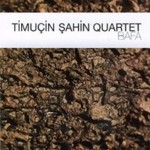 It might have been easy to attribute it all to Ornette Coleman Had he not recorded with quartets that did not include pianos the chances are not many musicians would have had the gumption to structure their quartets likewise. He then went and recorded Song X, one of his most progressive Harmolodic recordings that preceded his Primetime catalogue. The language of saxophone-guitar dialogues has never been the same after Coleman's legendary Harmolodic duels with Pat Metheny There is a chance that Timucin Sahin may have crossed that horizon after all, with Bafa.

Sahin is, musically, a direct descendent of Coleman and Jimi Hendrix That is, he could well be genetically connected, musically speaking. He is of similar mind when it comes to Harmolodic conception and his expansion of the musical possibilities of the instrument he only notionally shares with the legendary Hendrix. Notionally because he has developed his instrument into a double necked one, comprising a 6-string fretted one more or less conventionally tuned and a 7-string fretless one. It is his approach to playing this instrument that takes full advantage of the limitless possibilities that ensue.

There are no walls when it comes to the exploration of modal music—something between where John Coltrane once went late in his career and where men like Hendrix and Sonny Sharrock developed the language of their instrument. Sahin has expanded the harmonic possibilities of the guitar by not just by adding seven extra strings, but in his tuning technique, he has enabled the broadening of intervallic possibilities. As a result he is able to dive deeper into harmonic expansion by playing two handed at times as well. He also has a remarkable musical relationship with alto saxophonist, John O'Gallagher

The two men dance wildly around each other on most tracks—especially on "I Also Know How To Live Like Stars" and "New Years Letter." The counterpoint is brazen: Sahin screams like a dervish who has whirled himself into the giddying heights of hypnosis while O'Gallagher swings in figure eights, playing a line or string of phrases breathless and then inverting them as he returns to improvise in the back end of the chorus. This is not to take away from the interaction of drummer Tyshawn Sorey, who masterfully develops his melodic clatter and rumble along lines that meld Kenny Clarke and Roy Haynes with his persistent dropping of bass-drum bombs to accent the dramatically odd meters of Sahin's music. Bassist Thomas Morgan adds subtle shading to the songs with his angular plucking that slants across Sahin's melancholic wail.

"Bafa" delivers an idyllic vision of a mythical land. "Elif," mirrors the first letter of the alphabet and develops from rudimentary phrases into a spider web of polytonality. On "Around B" the musicians twist key signatures and their experimental expansiveness comes to a close on the oblique portrait, "Ciccado & Guguk."

Around B; I Also Know How to Live Like Stars; It's Time; Bafa; New Years Letter; Elif; Ciccado & Guguk.