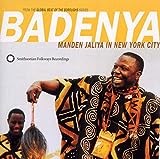 Let's get the facts straight up front: no jazz here. Why bother to review the music, then? Because it's good. Progressive jazz musicians have long appreciated the musical traditions of Africa, especially West Africa, and especially as they relate to percussion. During the '60s, jazz drummers began to assimilate instruments played with the hands, not with sticks, and as time went on improvising musicians have reached out to include the mbira (thumb piano) and various string instruments as well. A few obvious recent crossovers: Senegalese drummer Mor Thiam has been a regular staple with Bluiett and the World Saxophone Quartet; William Parker and Hamid Drake took traditional African instruments to town on their recent release, Piercing the Veil. Ben Allison included kora virtuoso Mamadou Diabate on his 2002 record Peace Pipe. You get the idea. This is the music of the past and the future.

With that said, Badenya is all about the new meaning of traditional West African music in the context of modern New York City. Badenya is a Malinke word referring to the bond between mother and child, but it also encompasses a more general sense of community and tradition. In this way it conveys many meanings. During the '70s a West African community began to coalesce in New York City, drawing its members from Mali, Senegal, Guinea, and other countries. These people kept their jaliya traditions, but in the New World context they also assimilated other approaches to sound. What resulted is a brilliant fusion, documented here on a recording by master players still deeply immersed in their heritage.

What stands out most dramatically on this recording is the near-total lack of drums. Instead, the group relies on the kora (a harp-like string instrument) and bala (like a xylophone) to weave together a net-like foundation. With this approach, rhythm becomes inextricably bound to harmony. While the harmonies might not be particularly sophisticated from a jazz perspective, they convey a crystalline beauty in their straightforward simplicity. And rather than following the extended forms common to traditional West African music, the group mostly simplifies matters to the 4/4 time signature found in most Western music. Rather than featuring instrumental solos, the music focuses on group cohesion and the sort of interplay that seasoned masters evoke through subtlety and an experienced ear.

In every case, the vocals shine—they are, in fact, the point of the music. While the language will without exception be unintelligible to English speakers, the phrasing, lyricism, and spirit speak volumes. Kindly enough, the folks at Smithsonian Folkways have supplied both African and English lyrics. On "Nanfulen," for example, the point is crystal clear: "Your ancestors have sacrificed for you / so that good things will come to you."

In the end, Badenya is true to its name. It's a musical statement which blends new and old traditions, aimimg for a spirit of celebration and enlightenment—and it never overstates itself. Like any deep spiritual music, it's best appreciated when you surrender your preconceptions in order to listen at a deeper level. If you can do that, this is as deep as it gets.

Visit Smithsonian Folkways and CTMD on the web.