Wooden Shjips: Back To Land

By GLENN ASTARITA
November 19, 2013
Sign in to view read count 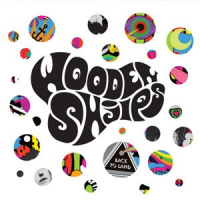 This West Coast nouveau psychedelic space-rock based unit has refined its oeuvre a bit. The moveable wall of sound remains intact, however a tad more concentration in melodic content advances the group to another level that would conceivably increase its scope of awareness within the college and satellite radio circuits. Nonetheless, the band has amassed a strong following, and rightfully so.

Guitarist Ripley Johnson's scorching, in-your-face crunch chords, trippy soloing, and the rhythm section's pulsating straight-four grooves are still administered, but this album conveys a balanced modus operandi. With streaming synth lines and a hard-rock footing, the program is not holistically raw, when compared to Wooden Shijps' prior excursions.

"These Shadows" is a thrusting work, comprised of Indie-rock type hooks and Johnson's airy vocals, followed by "In The Roses," which is an up-tempo psyched-out journey, infused with Nash Whalen's swirling keys. "Other Stars" is a weighty burner, executed in linear fashion, and sparking memories of Meddle and Atom Heart Mother era Pink Floyd. It's a tuneful theme and another example of the ensemble's emphasis on interweaving harmonious content into the big picture. Otherwise, Whalen injects a dash of antiquity into the album via his use of a Farfisa organ. And the band closes the production with "Everybody Knows," featuring simple keys phrasings, heavily distorted guitars and Johnson's blithe vocals.

Not to insinuate that Wooden Shjips has gone soft and is aiming its sights more towards strictly commercial acceptance, as the artists hone their songwriting skills to even out some of the jagged edges. And these notions do not to minimize the group's previous body of work. Yet Back to Land offers a symmetrical outlook by associating a take no prisoners approach with harmonically appealing choruses that coalesce the best of both musical worlds.

Back To Land; Ruins; Ghouls; These Shadows; In The Roses; Other Stars; Servants; Everybody Knows.